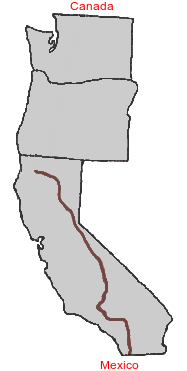 Did the usual sleep in/eat breakfast in camp thing. Read the Questlove book some more. So weird to be reading about things happening in a historic sense, but now they are from when I was in (and just out of) high school. Reading books about the Beatles and such was a whole other time I could not relate to.

Got on the trail around 8:30am. Walked about 30 feet and here was Geared Up laying there on his tarp. Looks like he fell about 50 miles short.

Had a really fast morning and I climbed the hills as if they were flat. There were a lot of water sources today. I was going to use one of them and when I got up to it, the water flow was just a trickle. I figured it wasn't the main flow so I continued on. About 50 feet farther was a creek with a nice flow. Next to the creek was an 8.5x11 inch piece of paper on the ground, weighted down with rocks. In a heavy sharpie marker was drawn a skull and crossbones with the words "DEAD COW JUST UPSTREAM" I looked upstream and in the meadow I could see what looked like a burnt log. Due to my angle I could see a ton of flies and heat waves coming off of it. That was no log.

I made up another note for the previous stream: "Do not use, see note in 50 feet".

Put some music on and listened to a Pretenders radio broadcast from 1980. It is funny to listen to the song Precious in that they completely miss censoring the words "shitting bricks" and they were a bit late when she sings "I'm to precious, fuck o..[cut]". Makes me giggle every time.

Due to the overly optimistic predictions of Geared Up I suspected he was the guy I (and others) had been arguing with on the Internet. Eventually I saw him again and caught up to him. Our conversation went something like:

"Ah, I wondered...I am Craig, I hear we argued on the Internet"

I basically laid it all out in calm fashion why I was so pissed off at him. The gist is that there are a lot of people new to the PCT and backpacking, and it is not a good idea to go try and inspire people to hike through the Sierras with no sleeping bag or tent. Geared Up said he had a pretty miserable time going through the Sierras because of it...and I wasn't the only one who talked to him face to face about his posts on the Internet.

Eventually the conversation rolled around to other stuff and we ended up hiking together on and off the rest of the day.

We met a couple southbounder overnight hikers who asked us if we were on the PCT. They didn't even know what trail they were on. They were pretty bent out of shape that some of the signs were down and/or broken. "We don't know where to go!", the lady said. The guy asked us if there were any lakes near and I pulled up the GPS map on my phone and said there is one about a couple miles back.

The guy thought it was pretty cool that I had a map on the phone. He turned to his wife and said "SEE HONEY, I TOLD YOU WE SHOULD HAVE GOT THE UPGRADE!". I told him Mavis Lake wasn't far. "Well, I guess that is where we are gonna go then", he said.

He asked if there was water soon and I said we had just crossed a stream from a spring. He liked the sound of that and they said goodbye.

After we were out of earshot I turned to Geared Up and said "...you see what I was saying about people not being prepared?"

Had about 20 miles in around 3:30pm. Stopped at Scott Creek and there were a couple women there. They gave us some cheese and chips. I ended up taking a clock photo of them, though I forgot to take one on my iphone so it will be a while before you all can see it.

I made dinner...gas didn't run out. Geared Up and I started the long climb. Around 8:00pm we stopped at a flat area. My right foot was hurting a bit so I thought about just stopping there for the night. After a few minutes I decided to move on. GU was going to leave in a bit.

The trail in this part is on a steep slope so there are not many places to camp. The next area that is flat was about four miles away. I got to Bingham Lake creek and decided I didn't want to be hiking until 10:30pm. Bingham Lake looked to be about 1/4 miles off the trail, just up a steep slope of boulders. I went up the boulders just to look and that point I decided to just keep going to the lake.

It was a bit of a challenge to get through the boulders and then up to the lake but I did it. As expected, I figured other people had been here at some point. The lake is pretty cool, a lot of rocks and cliffs make up the shoreline. There is a flattened spot among the rocks along with a makeshift fire pit.

I patched up my air mattress and ended up taking some long exposure photos of the full moon over the lake. It is kind of nice to be camped in a place that few PCT hikers go...it feels a little more special.

After I get back down to the trail tomorrow it is about 13 miles to the road. Once there I have to hitchhike 10 miles to get to the town of Etna. I didn't resupply here in 1996 so it will be a new town for me.