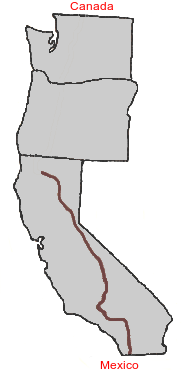 Long day today, around 32 miles. It was mostly flat though so despite updating this website and taking a longer lunch, I still got some distance in.

Woke up around 5:30am and made breakfast there on the ridge. Had a hard time sleeping since my tent was not set up. The bugs kept annoying me all night. I had to get my tent and stuff my head in it. This got too hot so I grabbed my camera tripod, set it up, and draped the tent over it. I basically made a teepee with my tripod and tent.

Anyways ... 5:30am .... there were flies everywhere at that time! Got on the trail about an hour after that. After a few miles I turned off the trail to go to Porcupine Lake. I thought it might be the lake that is in the next 1996 photo I have to retake. It wasn't, but I did meet a southbound hiker named Eeyore (sp, the cartoon character). He had the same shoes I did.

Going back to my pack I saw I had decent cell service so I updated the blog.

Met another southbounder named Forrest Gump. Nice guy. I told him about the Stand By Me bridge which he seemed excited about. I asked him if he met Anish and he said he missed her. He was in Etna when she went by. He did meet Lint who had hiked with her for a few days. He said there conversation went something like:

Lint: "I hiked with her...but only for about four days"

He said in about another 16 days or so she should be in Canada. There are another three guys behind her that are trying to break the record also, but they are doing it supported. So on the trail they are just carrying water.

The trail made a giant U shaped traverse around a basin and then heads south (!) for several miles. I planned on taking lunch at the creek. When I got there it was a shallow marsh, oh well, it was water.

The 90 minutes I spent there were well, a good example of why hikers hike rather than "slow down and enjoy the scenery". I was hot and tired, even in the shade. There were flies and bees everywhere. The worst thing was this damn chipmunk above me that WOULD NOT SHUT UP! I had some Bear Creek Macaroni and Hypertension Cheese. I am about out of gas so I'm really hoping Etna has the canisters or there are some 1/2 empty ones in the hiker box. I don't want cold coffee and such every morning.

Just before I left I heard another hiker. It was a guy I hadn't met named Geared Up. It kind of looked like the one guy I (and many others) had been arguing with online but I couldn't tell, nor did I ask. We talked a bit and then I moved on.

It was a really hot afternoon and I went through water like crazy. I stopped after a few hours and Geared Up came up the trail and stopped. He asked if I saw the rattlesnake just off the trail by the last spring, I had not. I asked him how far he was going tonight and he said "Etna". I said, "No... tonight... where are you going?". He said that he was going to do a "triple marathon" (78 miles) and then take a day off in Etna. He said he had 30 in already, but it was 5pm. It is extremely rare for hikers to do more than 50 miles without stopping to sleep.

After another couple of hours I saw him again, with a bunch of his stuff spread out next to the trail and he was reading a book on his phone/tablet. I just said hello and kept walking. Now I'm wondering if he is the guy I had been arguing with online after all. Maybe he is actually hiking right now and will get to Etna sometime tomorrow morning. I hope this is the case.

Me on the other hand, I have about 40 miles or so to go to get to the road to Etna. Really hoping I can meet up with my friends (Hi Thomans!) in a couple weeks. I'll have to keep moving at least 25 miles a day and a few 30 mile days to make it though, time will tell.

Oh, I heard cowbells today for the first time on this hike, and it was in fact some cows playing them in odd time signatures. Arty cows.