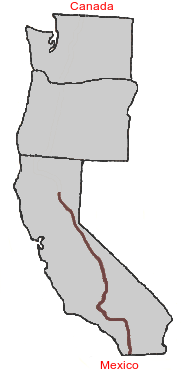 Got out of camp around 6:30am this morning with oatmeal and coffee in me. Walked about an hour and then got decent cell service so I spent about 45 minutes or so uploading photos to this site. The solar panel kept my phone charged during the process since it really takes a lot of power to upload photos. I couldn't sit otherwise the connection quality would drop.

Around five miles in I stopped to have a snack and TP and Soulshine showed up. We walked together for a few miles until they turned off to go to a spring that was .3 miles off the trail and downhill. I had taken extra water this morning so I didn't need to go down there.

Around 3:30pm I reached the midpoint of the PCT. Where exactly it is is anyone's guess, since the trail is constantly growing or shrinking depending on several factors. There is a nice marker at the halfway point if the trail were 2650 miles long, but other places has it as 2662 and 2665. Will and Roadrunner showed up a bit later. She was excited to have gotten her watch back. They took off and TP and Soulshine showed up. They were planning on camping at Soldier Creek and then hitching into the town of Chester tomorrow. I thought about going into Chester but I really didn't need to...especially since I lugged all that food up the hill out of Sierra City.

I left there about 7:00pm and got to the highway a little over an hour later. It would have taken less time but I dropped a ziplock bag for my camera and ended up jogging back to get it.

I got to Highway 36 and saw a pickup truck dropping Will and Roadrunner off. They lucked out and got a quick hitch into Chester, got a pizza, then a 2008 PCT hiker offered them a ride back up to the trail.

Bambi was there at the highway, he was in Chester earlier today. I haven't seen him since Vermillion Valley Resort. There were a couple other hikers there, Spitfire and Jersey...I haven't met them before but have seen them in the registers. I asked about TP and Soulshine. Jersey said they had just gotten a ride into town right before I showed up. I'm a little glad that I dropped that ziplock bag, otherwise I might have ended up going into town with them....spending a bunch of time and money. Not that i'm against that, I just need to get to Dunsmuir by Thursday. There I will take some time off to enjoy things and nerd out with the laptop.

Spitfire and Jersey had just gotten back from Chester and had a bunch of extra pizza, which they offered me a few slices. It was the only reason I really wanted to go into Chester was to get pizza...problem solved!

Did some working of the math today and it looks like if I keep doing 25-30 miles a day I can slow it down a bit to 20 miles a day in Washington and still finish by mid September. Since I stop a lot and take photos/etc, I don't hike as fast as other hikers. Therefore, doing 25-28 miles a day means I'm hiking all day and not doing things like "reading" or "writing letters" or "writing email" or "relaxing". Updating this site is about all I have time for and that can be a struggle at times. Washington is my favorite part of the PCT and having a couple extra hours of free time per day would make a huge difference.

On a side note, I was able to do the math, calculate dates, and look at the mileages all while walking. The scenery has mostly been forests that have been logged to death and then replanted, so there isn't a lot to see. Somehow I have the ability now to do stuff on the phone and walk at the same time, my peripheral vision keeps an eye out for rocks and such. Granted, this isn't a skill I want to try and perfect so I can do it all the time. (phone wouldn't stay charged anyway, and I'd probably walk off a cliff at some point, end up in the newspaper, and face the wrath of armchair hiker online commenters.

Ok, gotta get to bed so I can spend all waking hours hiking yet again, just so I can have an easier day into Old Station on Friday.