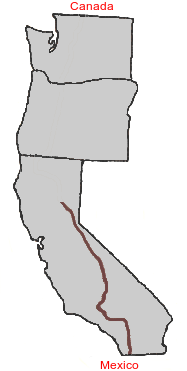 Woke up on the rock and the sun was coming up. Texas Poo yelled up to the sky "MA! PLEASE, JUST 10 MORE MINUTES, TURN OFF THE LIGHT!"

I made my morning coffee and Cora's Strawberry Oatmeal. TP was singing about Belden which was the next town we were passing through. I started singing "Beldentown" to the tune of Billy Joel's "Allentown". It was about 28 miles to Belden and I didn't know if I would try and make it there or not.

I hiked on and off with Texas Poo and Soulshine, depending on whether or not I was stopping to take a photo of something.

After crossing a road we saw a unique note alerting a hiker named "Anish". The note asked if this person would write a quick note back indicating that he/she had passed, but that they were looking to meet them and help out in any way possible.

I stopped near a spring around 9:30am and made some of my dinner food for breakfast #2. I went away from the spring since there were less bugs. Later on I could hear voices by the spring. I took my food and it was Happy Feet, ??, and Faucet. We got caught up with things and then continued on.

It looked like there was only one climb today of about 1200 feet, the rest was about 4000 feet of downhill. I found out from Faucet that the Belden store closed at 8pm, so it looked like getting there was feasible.

I walked by myself for a couple hours, alternating between positive thoughts and negative ones. I'm kind of running out of things to think about, but listening to the Radiolab podcast has helped a bit. I also listened to the first John Lennon solo album and that gave me an idea for a funny t-shirt, although I wonder if any of the 20 something hikers would ever get the reference.

Around 1:30pm I came upon everyone stopped near the trail. I had already taken a longer break so I didn't say long. Happy Feet left at the same time as me and we walked together for the 11 remaining miles to Belden.

HF walks pretty fast and I didn't have a problem keeping up with him, I just have a hard time keeping that pace when I'm walking by myself. It was good to walk with him and swap stories. He told me how he used to do a bunch of low-voltage electrical work before he got laid off. The boss told him there was a storage unit that they had that needed to be cleaned out. As payment he was welcome to anything in there. HF said it was stacked to the ceiling in electrical wire that had not been used. He was able to sell off/recycle the wire and that paid for a large chunk of this current PCT trip he was on.

On a gear note, I really like having this USB battery. Now I don't have to specifically stop to charge my phone in the sun, I can just charge it at night instead.

The battery spends all day charging via the panel riding on my pack.

We took a break about five miles from Belden. Down the trail comes a girl in her late 20's/early 30's. I thought she was a day hiker at first since she didn't have a super huge pack nor had the tired/defeated walk that a lot of PCT hikers have in the afternoon. Happy Feet recognized her since he had recently seen her in a photo. She was the "Anish" that the note earlier was referencing. Anish is the girl that is trying to break the unsupported PCT speed record held by Scott Williamson of 64 (?) days (it is on the PCT wikipedia page). Today was her 31st day of hiking since she left Mexico. Today is my 83rd day if you need a comparison. She will hit the halfway point of the PCT tomorrow so it looks like she is on track to break it, averaging around 43 miles per day. She hadn't met Scott before (but he is her idol), but surprised her at Donner Pass and brought treats for her a few days ago. He jokingly asked her to not beat his record by too much and wished her well. Apparently he is hiking the PCT southbound this year so hopefully I will get to meet him.

We reached Belden about 7:00pm and went inside to get snacks. Anish was eating fish and chips. I ordered a hamburger and got a few things from the store. Anish told me that she ran into a mountain lion last night around Bear Creek. It would not move so she went up off the trail and pitched her tent in a somewhat flat spot on a hill.

There ended up being about six of us there eating. Anish left since she still had another 10 miles to do and the rest of us went off to the camping area. Oh, there are porta-potties everywhere here. They have raves here every weekend. I thought it would have been kind of fun to go to one had I hit Belden a couple days earlier. Just the thought of going to one while on the PCT seemed a bit absurd, big beard and non-cool clothes and all. Oh well.

We talked a bit around a non-existent campfire. I mentioned how I learned that Lightning Rod's name was "Joe" and then LR said that Happy Feet's name was "Chad". Wow, two name-outings in one week. I knew what Texas Poo's name was because his friend who was hiking with him in the Sierra's mentioned it. I got video of Lightning Rod and Happy Feet trying to guess Texas Poo's name. Eventually they said "Patrick", which was the correct answer. HF and LR looked at each other and said "Patrick...that totally makes sense!"

The entertaining part was