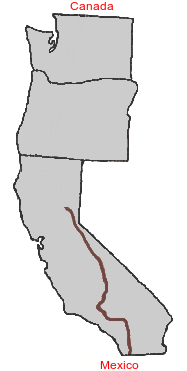 Woke up and Lightning Rod's Mom was making pancakes. It was a nice change of pace for the morning. We ended up on the trail around 7:30am.

I was by myself most of the day just hiking through the trees. Eventually the trail dropped to the Middle Fork of the Feather River. This is notable because the bridge over it is the highest one on the PCT (that is foot-traffic only). From the bridge I could see all kinds of swimming holes.

I went down to the river and Soulshine and Texas Poo were there. I jumped in the water and I can see why when they baptize people they will dunk them under water. After dunking myself in the river I would have believed about anything I felt so refreshed and overjoyed. Made lunch and then started the long climb up out of the canyon.

Prior to getting to Lookout Rock there was a spring. I wasn't about to make the same mistake I made a few days ago so I loaded up on water. After about 1/2 mile I got to the rock. Soulshine and TP were camped out on it. I went out there and joined them. As I cooked my dinner I showed them Heavy Metal Parking lot on the iPod that Cora got me. It was kind of cool hearing them laugh their heads off while perched up on a rock cliff in their sleeping bags.

Soulshine is carrying a watch that a day hiker had given him. The hiker had found it by the Feather river and thought it might be Roadrunner's.

Tomorrow I might or might not get to Belden. I don't have a resupply package there but I would like to go to the store at least. The post office closed this year since the people who ran it retired and nobody has taken their place.

Oh, today I also realized that if I stick to 25 miles a day I should be able to hit Old Station on Friday before the PO closes, another goal to shoot for.