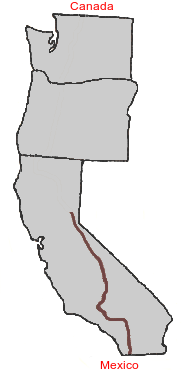 A nice sleep in again this morning, with a girl even. (and a pushy dog who moved from her bed to our bed around 5am). I had forgotten it was my birthday until Cora reminded me.

Cora and I went and did the morning dog walk to the coffee shop. It has been nice to pretend to live in a neighborhood with a local coffee shop and a very low meth head population.

Later we went to breakfast and upon arriving back in the house it was all decorated for my 40th birthday party! We had cake and ice cream around 10:30am. The kids gave me a balsa wood plane and 1965 Corvette match box car.

Cora, Chris and Ms. Freddie left around noon. I was sad to see them go since they had just gotten here. At least I'm near the halfway point..I couldn't imagine having to say goodbye with another four months still in the trip.

I spent the afternoon packing up my bounce box and trying to get the lunky.com site updated. Most of the entries are complete but it still needs some more work. Cora offered to fix typos and put in links to my obscure references so you can thank her for those.

Around 6:30pm, Chris' brother Mike gave me a ride back up to the trail. I did stash my balsa wood plane in the house so I have to visit later. Unfortunately I put it in a spot where it fell behind a wall, so it might be a bit difficult to retrieve it.

Got back onto the PCT and farted around a bit on the Internet. After about four miles the trail went under I-80.

I took the detour to the rest area. The last time I was at this rest area was during my 1996 hike. I was in the stall and someone held a note offering their um, services. I wasn't into that sort of thing, but really the note had such terrible handwriting that I don't see how anyone could have been turned on. On a side note, this made me think of a documentary I saw years ago on those gnarly Highway Safety films. They had a whole segment on what happened when they put cameras in restrooms trying to capture vandals.

Listened to the Marc Maron interview of Cheech and Chong, it was a really good listen. Got to Castle Pass and called it a night.

I can see I-80 in the distance. The wind just came up but hopefully it won't be too bad.

Oh, I also weighed my pack at the house today, 27 pounds with two liters of water, three days of food plus fuel.