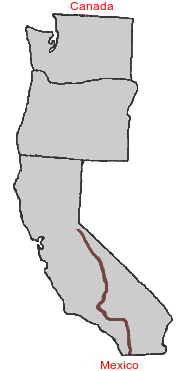 Slept in and didn't get onto the trail until 7:30. Since the rain was gone, the mosquitoes were back and making up for lost time. I was kind of irked about not being able to set my alarm but was thinking that today would be fine anyways.

I had to stop about five miles in to get some power into my phone so I could finally get some power into it. I ate a snack, then packed stuff up and continued on. After a few more miles I stopped and emptied out everything from my pack so it could dry. Then of course the clouds decided to start blocking and unblocking the sun every other minute.

I spent a while there and continued on. I barely had 7 miles in by noon. The trail climbed higher and the scenery was nice, but I was still a bit mentally frazzled from having my plans changed due to rain and then the late start this morning.

Eventually I got cellphone service since I needed to check in and make sure the Amazon order got resent. It took a while to make sure that got sorted since the connection kept dropping.

This package wasn't sent, this order didn't show up, something on the server needs to be looked at, etc.

I hate it when stuff goes wrong, but it is much worse when you have to proxy everything through someone else you don't want to be adding tasks to, then on top of it only being able to communicate every few days. The Amazon order has some new hard drives so I can back up everything and send one home with Cora. This way I can start carrying a smaller backup hard drive with me. (1tb instead of a physically larger 2tb) one. I really don't want to spend the whole weekend doing busy work...which lately it seems like that is all I ever do when I'm not walking.

The connection kept dropping out and I got so frustrated I threw my trekking poles. Granted, I learned from UB to throw them somewhere that they can be easily picked up later.

I finally got everything sorted and quick looked at Facebook and there were a few things, but after I saw how Pretentious Prick was really ripping apart anyone who disagreed with him, I just shut the phone off and packed up.

I was still a bit worked up from all the time I had spent not-hiking, not-relaxing. Just then a guy came around the corner, as if right on cue: "you look to be burning up a lot of daylight standing there...". I could have screamed but just aid "yeah....have some stuff to deal with".

The hike was nice but I was still having a hard time getting any energy going. I dunked my head in a creek at one point and that helped. Iggy Pop was interviewed on the most recent Marc Maron which I was able to download...that was a good listen.

As I approached Carson Pass I came upon an older couple. They moved out of the way and we talked a bit. The guy said "oh to be young again". I told him that I turned 40 next week and he said "ha, that is still half my age!"

I got to Carson Pass only to see that the little visitor center had closed 30 minutes earlier. No soda for me. To add insult to injury (which I had just scraped my leg hard, so there was an actual injury), I was walking along and one of my headphones had fallen out of my pocket and into the ice grate...it snapped right off. Those headphones I got at the I-15 gas station over 700 miles ago were now done for. Fortunately I had another pair with me.

A guy in the parking lot talked to me a bit and gave me a bag of potato chips. I hiked for a few more hours and into the darkness. The mosquitoes were brutal and I had to break out the Deet Wipes.

I am about 5.5 miles from the Echo Lake Resort. It wouldn't have done me much good to push it farther than this because they probably don't open until 7 or 8am. I don't know if Ill be able to get my box before 11a though. After that I will have 65 miles to do, the builk of which will have to be on Friday.

It is midnight now so I gotta get to bed so I can wake up earlier...and hopefully not sleep in again.