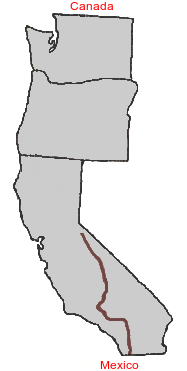 Woke up and was out of camp just as the daylight was coming up. Bob Dylan kept me company as I climbed up over the ridge. I turned my phone on hoping cell service would pop up. I really needed to find out if my friend's parents were going to meet me at Sonora Pass.

After about an hour my phone started making all kinds of noise from the text messages popping up. I checked my email and Mike (friend's Dad) had wrote me and said they would meet me by noon. I wrote him back and told him I'd be there by 10:30am. Since I had some time I stopped and ate some of Cora's oatmeal.

The Kid showed up a while later and I told him there was service here. He said "ohhh" and turned on his phone, only to have it make nonstop tones for a while.

I made the final push down to Sonora Pass and upon getting there a guy said "you on the PCT". I said that I was and he was offering rides down to Kennedy Meadows. Turns out he had hiked the trail last year and his name was iPod. I told him thanks but I was meeting someone at the pass. I walked up the hill a bit to look at where I camped in 1996.

Back then I had camped at Sonora Pass and woke up about 3am to the sound of tires screeching and a car stopping. "GET THE @#$@#$ OUT OF THE ROAD YOU IDIOT!", then the car sped off again. To this day I have no idea what was in the road, another person?, a deer?

Mike and Kris were not there yet so I went down the PCT to the trailhead by the side of the road. I didn't see them there so I walked back on the PCT to the pass and they pulled up a short while later.

We talked a bit and decided to go to Kennedy Meadows to eat and get my box. I was able to get things packed up pretty quickly (by this trip's standards so far at least). I had a giant chili burger at the restaurant and soon we were driving back up to Sonora Pass.

Mike pointed out all the backpacking spots that their family had gone on one time or another. Looks like it would be a great place to grow up.

We saw a couple cyclists struggling to climb the hill...it must have been a good workout since the pass was over 9000 feet high.

Mike and Kris had all kinds of food for me that I loaded my pack up with. We all walked together for about two miles and then they said goodbye.

As the trail neared the top of the ridge it got sunny for a bit. The clouds looked a bit nasty so I figured I had better take advantage of the sunlight while I could. I couldn't figure out where to stop and eventually a gust of wind came up and blew my hat off. I decided that was the spot where I was gonna rest and charge up.

The sun pushed my phone from 40% to 91% charged, and my stomach ate (and drank) about three pounds of the chips/cookies/beer that Mike and Kris gave me.

At the top of the ridge I found Internet again and did a couple things on the travel site. Unfortunately I checked in with Facebook and that jerk who walked through the sierras without a tent and sleeping bag was going off on everyone who disagreed with him, including me. We were all "weak willed". He apparently didn't like my comment about how hypothermia really didn't give a shit about strong minded people. I shut the phone off and continued on.

Sadly I didn't realize it this time (I did in 1996 though) but the trail dropped below 10,000 feet and that was the last time ever it would be up in the five digits of altitude.

I continued on until dark came and camped about halfway up a ridge where I found a little perch to put my tent on.

Looks like I will need to do about 25-30 miles tomorrow to stay on schedule which seems doable.