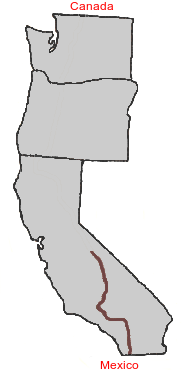 Got onto the trail around 5:45am. It was pretty cold out. Stopped for breakfast/coffee a couple hours later. I stripped down to my day clothes (shorts and shirt), but had to put my warm clothes back on near the top of Donahue Pass. It was so freezing cold at 9am. This was the first time I had to put warm clothes back on despite the sun being out. The trail mud made a crunching noise as I walked on it.

Despite no clouds in the sky, it was really cold and windy at the top of the pass. Of all the passes I've crossed, this was definitely the coldest. To mark the occasion I did the only logical thing I could think of....underwater video.

At the top of the pass were these large pools of water that were frozen over. The ice was thick enough that I could not break it with my trekking pole. I took out my ice axe and smashed a hole in the ice, then put my GoPro camera underneath the ice. About three feet away I dropped a rock through the ice. I repeated this process a few more times, both using rocks and my ice axe. Hopefully the video will turn out and make the temporary numbing of my right hand worth it.

Drama walked by me as I was doing all this. i just replied: "you caught me screwing off". He paused a bit and then continued on.

I caught up to him later during the descent through Lyell Canyon where we leap frogged each other for a while. I had this vacuum sealed wrapper that kept falling out of my pocket. I stopped to finally deal with it and it was no longer in my pocket. Drama comes around the corner holding the wrapper so all was well.

Suddenly everything changed as the trail flattened out. Their clothes did not have stains and colors were bright. They looked well fed and groomed. Some were even scented with a smell that attracted, rather than repelled. These were "day hikers" and they were everywhere.

One guy asked how the view was and I motioned to his shirt and said "the shirts are awesome" (he was wearing an Atari t-shirt).

I finally reached Tuolumne Meadows around 3:00pm. There were cars everywhere. I got to the store and po about 15 minutes later.

The PO only had two of my four boxes. The guy at the PO called to Yosemite Valley and they were down there, but they could transfer them up to TM tomorrow. The boxes would be available around 1:00pm. At first I was a little dismayed at having to wait around until then, but also realized that I had a lot to do and it would be wishful thinking to get my laptop mailed off at 9am and be back on the trail at 9:15am.

It was a bit stressful being around there because there were people everywhere. I think the store hires people to mindlessly stand in doorways and block everyone else.

The shade was very cold and required you to have a coat on, but if you stood in the sunlight you would start baking in the heat. Even worse, the store and cafe closed at 5:00pm so every-decision-needed-to-be-made-right-now! I did get a burger and fries, then before the store closed I went in and got some beer. Their cheap beer was just 12oz can six packs of just Coors, Budweiser, and one other beer in 16oz cans.

I paid for my six pack of King Cobra and walked out the door six dollars poorer. Outside, Texas Poo saw my purchase and let out a huge cheer for me. "FINALLY! I was hoping someone would buy one of those!"

We walked over to the TM campground where they have hike-in sites. Got all settled and I set about trying to find power for my laptop. There was none to be found in the bathroom nor any of the RV spots seemed to have hookups. I headed to the campground host and saw a bunch of electrical conduit. Oh oh oh!

I asked the campground host if there was power anywhere and/or could I pay to plug my laptop in. He said that he had a power strip and that I should could just set up at the picnic table. The host's name was Trey and he had actually biked there from Washington.

I got the file copy setup and went and got my King Cobra stash. I offered Trey one but he already had a more reputable beer in his hand. We talked a bit and found out we had similar tastes in music. He was playing music off his phone and had mentioned that one of his microSD cards got wiped out. Gone was all of his Grateful Dead music. I told Trey I had about 30 GD shows on my laptop which my wife's Uncle Bruce had sent me. He got very excited and set about looking for this microSD card. I stress the "micro" because he couldn't find it. I ended up finding it in the dirt under the picnic table. I copied a bunch of stuff over, he popped the card in and upon seeing the words "Grateful Dead" on his phone...he got really excited. Soon enough he was sitting by the fire and playing the music. I was there a while since I had a lot of cards to copy off and back up to the hard drive I am carrying.

It is a minor production to get all of my cards cleared off and backed up but I finally got it done around 11:00pm. I walked back up to the camp and there were a few people still about. Earlier I had told them that I had Heavy Metal Parking Lot on my laptop and would show it if they were still around.

We watched it and they all laughed pretty hard at the token parts of the "film". I think I mentioned this earlier but HMPL is a 16 minute film where a couple guys who had a cable access show went to the parking lot of a Judas Priest concert and interviewed people.