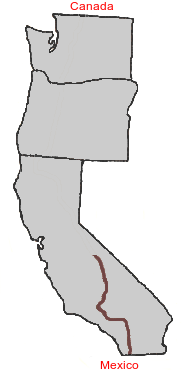 Today is two months on the trail, also passed the 1/3 of the way and 900 mile mark too.

Alarm went off at 5am and I hit the snooze button a few times. Rolled out of the tent around 5:30, made coffee, and packed stuff up. Everyone else was still asleep. As I was starting to walk out of camp I saw that Spoonman and Skinny D were sitting up in their sleeping bags. I went over to say goodbye. Skinny D asked if the bus was running from Red's Meadow to Mammoth. I had one bar of Internet so I checked and saw that it wasn't.

As I was doing all of this Spoonman had gotten up and went of into the woods for a bit. He came back and said "eh, yup, I think today is gonna be a three hole day".

I laughed and headed out, figuring I'd see everyone at Silver Pass where I was planning on doing coffee/breakfast.

The climb to the pass wasn't bad. My music player is still having issues so hopefully I can get it working when I get to my laptop at Tuolumne Meadows. I had two podcasts left to listen to so I put on one of them. It was a Champs podcast where they interviewed the guy who made the films Menace II Society and American Pimp. It sounded like it would have been a good interview, but the hosts' microphone levels were all distorted (which they acknowledged beforehand). I really wanted to listen to the interview but the audio quality was making me cuss out loud in frustration. I got so irritated that I stopped it and deleted it halfway through. I could have been listening to morning birds, but no, I had to attempt to listen to a podcast that would have been better off not being released.

I mean, seriously, imagine if the chef at a restaurant came out to your table and said, "hey, um, I'm going to serve you some great fish, but much of it has spoiled, so if you eat around the bad parts you will still have a good meal, I won't charge you or anything" If your podcast audio came out terrible, don't put it online, it only degrades the thing you have worked hard to build up.

On the way there I saw Richard/Rabbit Stick whom I had first met just before Forrester Pass. He was ahead of me but I knew it was him based on his hat and the way he had his sleeping pad attached to his pack. I let out a drawn out "Heyyyyyyy Richardddddd".

Got to the top off the pass and I exploded my pack back out so I could dry my tent and sleeping bag off in the sun.

Had a nice talk with Rabbit Stick....interesting guy. He owned a rafting company in Moab and then sold it to his managers. With that money he built a 29 foot rowboat and rowed it across the Atlantic Ocean. His first trip out from Lisbon lasted a week before he hit a bad hurricane and had to stop. A couple years later he set out from the Canary Islands and made it to the Bahamas where he got shipwrecked and had to be rescued. I asked him all kinds of questions about the journey.

The whole crew I had camped with showed up a short time later. I spent about 10 minutes trying to balance rocks on my solar charger so it would work and charge up my phone. We talked a bit about random things. Spoonman mentioned that he is in some AT hiker's book, although the author changed his name to "forkman" to hide his identity I guess.

There was a fire burning down in the VVR valley and smoke coming from that direction. I hope nothing bad is happening.

Anyways, the whole crew+Rabbit Stick left and I finished packing up my food stuff and was the last one out of there.

As I was walking to where the trail hit the pass I saw a kid in his late teens/early 20's. He didn't see me, but had his phone up and he was making a video and narrating it. I saw that he was panning over my direction so I started waving. He jumped a little when he saw me standing there waving. We talked a little and moved on.

I got about 1/4 mile down the trail and saw a southbound hiker heading towards me. He looked at me and said "Are you Craig/OTC?" I said that I was. He told me his name was Dave and that he had been following the blog and was hoping to run into me. That was his son who I had talked to up on the pass. Dave said his son was probably getting annoyed with him because he kept asking hikers if they had seen me. I took a clock photo of him and I gave him a real time update on the blog. We shook hands and said goodbye.

I walked a bit and then it hit me that I didn't take a photo of him on my phone, which meant that I couldn't easily put a photo of him on the blog. I dumped my pack and jogged back up the trail to get a photo with him. I reached him and took a photo. Hi Dave!

I worked my way down the canyon, debating if I should listen to the only two albums on my phone or just go for quiet, I chose the latter. I also chose to eat an "energy bar" aka "sawdust bar".

Saw a few more JMT southbounders over the next few hours. Just prior to the Fish Creek Bridge I saw the whole crew there resting. i had to go off to the woods to the bathroom and nearly died from mosquito poisoning of the butt cheeks. After I got back Spoonman went off to dig his second hole. I told him to watch out for the mosquitoes. When he came back he seemed a little shell shocked from all the mosquitoes that were hiding in the bushes off the trail.

The spot where we stopped is essentially the 1/3 of the way to Canada spot. As a bonus, in another 12 miles we would pass the 900 mile mark.

We continued on but I ended up falling behind since I wanted to get some underwater footage with my Gopro camera. The creek had all of these interesting pools despite the rapid water. I stopped again farther up the trail because there was a really nice looking swimming hole in the creek there. It was good to swim underwater. The Gopro battery died so that put an end to my underwater camera fun.

Passed Tully Hole which is this meadow down at the bottom of all of these high mountains. One of my 1996 photos with me in it was taken there. Unfortunately a storm blew down a bunch of the trees and I couldn't recreate the photo, nor even tell exactly where it was taken.

As I climbed the hill I thought of some of the conversation last night. Greg and I were talking about pranks that would be funny to play on hikers. I've long had this idea for "Wormhole Man". Basically take a guy that looks like Wilford Brimley and dress him up in vintage 1901 clothes and hiking gear. Have him walk down the trail and talk to the hikers, just as if the year were 1901 and everything. He could show them his "brand new" fishing reel which would obviously be old looking. He could also bitch about President Woodrow Wilson or something too. He is wormhole man, like he stepped out of some space/time wormhole and onto the trail.

I was slow at making progress for the day because I kept stopping a lot to fart around taking photos or video. At one point I saw a guy and his kid headed my way. I said hello and I heard a "Hello" back in a Queensland Australia accent. We talked and I asked where he was from. After drilling down a few locations I found out he was from Mackay, Australia. I told him of my friends Duncan and Alison who were from Emu Park near Rocky. I told him about VVR and the pie/ice cream and he replied "Fair Dinkum" (google it) which made my heart melt a little. I hadn't heard an Australian say that for ten years. [yes Nadia, I know you are from Perth and I saw you last year, but WA/Perth folk don't seem to say that phrase as much as QLD folks do]

I was walking down the trail towards the end of the day and saw "900" made out in large branches on the side of the trail. Crap, I nearly had forgotten. The spot was at mile 900.43 according to my Halfmile PCT app.

In an attempt to break out of my need to be perfect I took the "900" photo there, rather than walking back the .43 miles to take the photo. I've been using Halfmile's iPhone app to track distances and have been basing all of my "100's" photos off of what it says, all except this one.

Oh, tonight after I had my tent set up I played a prank on everyone that was in direct lineage to something my father would pull. Last week when I was camped with U-Turn and Becca at Onion Valley, I had recorded the sound of their air mattress pump whirring away and then stopping. So I turned up the volume on my phone and pressed play on the recording, then set the phone inside my tent. I stood outside of the tent and said "Man...it takes this mattress FOREVER to inflate!"

B*rad, Spoonman, and Skinny D all came over with a really puzzled look on their faces. They looked in my tent and couldn't figure out why my little air mattress was not inflating. The sound of the pump wound down. I reached in and hit "play" on my phone again.

"Sheeeit...You have been waiting forever to do that haven't you?", said Spoonman. "I wouldn't have been surprised though if you had an air pump given how much extra stuff you have!"

I have about six miles in to Red's Meadow tomorrow. Going to have breakfast even though I have a lot of extra food this leg. Everyone is impressed with my dinners, dehydrated veggies and stuff from the Asian grocery super store. I think I'm the only one not bailing off the trail to go to Mammoth. I went there in 1996 but can't remember what I did, I think I did Laundry or Saw a movie, not sure.