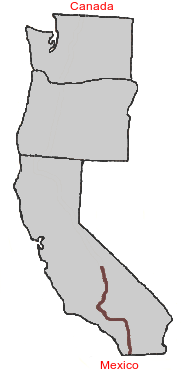 Had a hard time sleeping last night because I was sleeping on a slope much greater than I'm used to. Kept waiting for the sun to appear off towards Mather Pass, but then realized I was turned around a bit and it was going to pop right over the cliff in front of me.

After I packed up I walked back up to the other lake to retake a 1996 photo. Yet again, I burned up another 45 minutes scaling around the cliffs looking for that secret camping spot. Still never found it. Was a bit frustrated I wasn't even really hiking until about 10am.

Ran into a hiker I hadn't met before. He was eating an avocado and he launched the pit one direction and threw the skin down in between some rocks. It was too late to do anything about it so I let it be. Reminded me of one time in Oz when this guy I had been biking with for the day threw his banana peel behind a rock...right next to the 12 Apostles, a huge tourist area. I picked it up and he said "...but it is biodegradable..." It is, after many years. Reminds me why I hate that biodegradable soap, people think that they can just use it in creeks and be fine. They don't bother to read the directions, hence a few of the creeks in the Sierras have soap bubbles in them.

Anyways, the scenery was really pretty today. The trail snaked its way down into King's Canyon. I ran into SL and Yeah Yeah again. The trail got down low, around 8500 feet and you could see aspen trees and whatnot. I stopped by the middle fork of the King's Canyon River and ate lunch, then moved on.

It was ten miles to the top of Muir pass and I hoofed it hard, hoping to be there by around 6:30. That time came and went and it wasn't until about 8:30 that I made it to the top. The trail was buried in snow, what was not buried had a creek running through it. There was a lot of scrambling. When I got to the first lake I thought I didn't have much farther, then was frustrated when I realized I still had another 2.6 miles and 1600 feet to climb. I was a bit annoyed for taking so long this morning...I was going to miss sunset. After an eternity I saw the hut at Muir Pass up on the horizon.

Got to the pass and there was one guy camped there. Last time I was here there were 19 people camped on top. 40 miles to my next resupply, looks like I will have enough food to make it. Still have a big portion of M & M's that are unopened, I don't think they will survive tomorrow though.