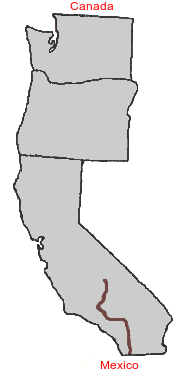 So nice to be in the Sierras. It is still kind of hard to get used to after spending five weeks in the desert. It was't much of a problem in 1996 since I had started at Highway 58 and only had to deal with the desert for about a week.

Slept in, messed around all day and still went 16 miles, such a nice change. Will have to start speeding back up to the mid 20s after the Sierras and 30s in Oregon.

Slept in to the point of the sun coming up over the ridge and hitting my tent. Did the morning coffee thing and packed stuff up. As I was tying my shoes I saw Detour walk by but he didn't see me since I was a bit off the trail. Later on Purple Haze walked by and stopped to take a photo of the mountains in the distance. Eventually I yelled "Good morning Mr. Haze!" He looked around a bit and said hello.

I reached the 11,000 foot level and the trail started to drop. I listened to the Smiths, a band I should know more about but I don't. (apart from the Queen is Dead album).

Speaking of music, my music player won't build a database of songs if there are too many files in a directory. When you drag/copy files out of iTunes onto a disk it puts all the files in a single directory. I wrote a script to create subdirectories for all the artists. There is a bug in it though in that it cannot movie files that have an apostrophe. I can still play the files though, but they are not as organized as they should be. The funny part is that I have a directory of about 500 songs that all have apostrophes in their filename. Hence, a lot of "I Don't..." and "Can't" songs are sitting there.

Wasn't feeling too motivated and had to stop a couple of times. Around 12:30pm I reached the off-trail spring. It was a bit hidden but I found it. I ended up spending 2.5 hours there doing a little bit of everything. The last hour was just getting all the blog posts ready to send for whenever I got a cell phone signal.

I left the spring around 3:00pm. Seven miles by 3:00pm, ha ha. Somehow in the forest I didn't care, but had I done that in the desert I would be really annoyed.

Before I got back to the PCT I was thinking how if I hadn't have said hello to Purple Haze, I might have been able to go the entire day without talking to anyone. Not five seconds later Lighting Rod came around the corner and yelled in my direction: "CRAIG! Where is the spring? Did you find it?". I told him where it was and continued on.

I got a bit more motivated when I put on the Rolling Stones' Exile album (later followed by Sticky Fingers). I had some 1996 photos on this stretch to recreate so I was keeping an eye out for them. I had done one earlier in the day that was throwing me off a bit. The photo was of a meadow and I could find certain parts but not others. Eventually I realized that the trail must have been rerouted in the last 17 years. I cut across the meadow until I found the spot where I had taken the photo in 1996...where everything lined up. Sure enough, I could see the faint remains of the old PCT there.

The trail climbed and eventually there was this cool little popout over the valley about 7000 feet below. I had a cell signal there so I sent off the blog posts and wrote Cora about my box in Independence. She was going to call them. I got to thinking today that maybe it was an auto-generated message I had received about my box being returned.

The mosquitoes are here now...had to break out the deet. Another change a-happening.

Lighting Rod came past me again. I ended up having a nice evening walk listening to Roky Erickson. The blog posting and photos ate up about 60% of the charge in my phone, so I stopped for a few minutes and put some more power into it with the remaining sunlight (thanks again Anne and Rusty for the charger).

I could see a meadow down in through the trees but from looking at the map the trail didn't go to it. The sun was starting to go down and curiously got the best of me so I cut off trail down to it. The meadow was large and I took a few photos there. It also made a nice place to camp, despite the cow poop around. The meadow is at about the 10000 foot level. This seems strange to me since the only thing in WA or OR that is this high are the volcanoes with glaciers on them.

Tomorrow I will camp somewhere before/or at Crabtree Meadows. Thursday I will climb Mt. Whitney, and if the weather looks good I will camp there.