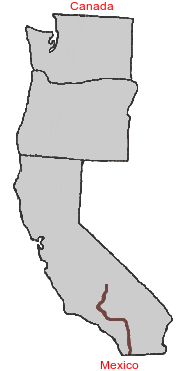 Did my busy work which lasted until about 2pm. Dr Sole was serving breakfast so I had some of that. UB was there, turns out he and two other guys pulled a 52 mile day from Walker Pass. UB said the last section broke him also, to the point of getting so frustrated he launched his hiking poles off a cliff.

Later in the day I saw Muk Muk getting her feet worked on by Dr. Sole. She was excited to see me and we caught up on things. I hadn't seen her and UB for nearly a week.

Found out that yesterday (I think), Meadow Ed had some sort of seizure at Walker Pass and went to the hospital, I hope he is alright.

Sailor Moon, Joey and Anastacia showed up a bit later. Eventually most of the crew I had been traveling with was there. I ended up deciding to stay at Tom's place that night and leave early in the morning.

In front of his place he had a hanging scale, I weighed my pack...with four liters of water and six days of food it weighed 54 pounds, ugh.

Tom had a little Internet cafe setup in a trailer. There was no wi-fi but some laptops you could use. I checked my email and saw that my Independence resupply box got returned since it had been there more than 14 days. This was a first. Looks like I might be buying food in Independence.

I picked the movie, Roadhouse. Tom has this little amphitheater setup with a screen, couches and mattresses. When the scene with Patrick Swayze's but was about to come on screen someone in the back yelled "...and here is the money shot!". Then with Patrick's butt showed up on screen the whole amphitheater cheered.

I cowboy camped near Joey, Anastacia and Sailor Moon. They were all in their tents so I could not see them. Sailor Moon asked me through her tent if I was leaving early in the morning since I was getting everything else packed. I told her yeah. After a few seconds I took a more serious tone and said "Sailor Moon?"

"If I leave here tomorrow, would you still remember me?", I said.

All three tents started laughing a lot and on that note I went to sleep.