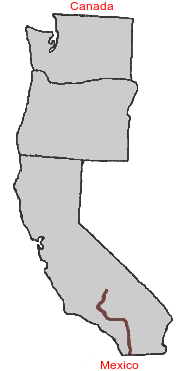 Woke up and the wind was not blowing at all. Such a nice change of pace. Listened to old Steppenwolf for a chunk of the morning. Kind of nice to listen to their non-radio songs.

Passed U-Turn who was packing up. Later on the trail turned into a road that is used by ATVs, hence it was rocky and torn up. I still had not taken a breakfast break at all. I was going to sit down on this large rock when I saw Blur and U-Turn coming down the trail. I just kept on walking with them. I can hike a lot faster if I walk with someone else.

U-turn and I walked the remaining six miles or so to Walker Pass. He lives in Tahoe and works as a land surveyor in the summer and a restaurant manager in the winter. He is having to get off the trail September 7th for a wedding so he either has to finish before then or hop off and come back.

I joked with U-Turn about how I didn't want to take any breaks just so I could just spend more time at Walker Pass and have a greater time window to maybe get a beer from a passerby.

We got to the Walker Pass campground and saw that one of the picnic areas was all set up. Walked down there and saw Lightning Rod. An older guy walked up to me and introduced himself as Meadow Ed....and he offered me a beer.

Meadow Ed and I talked for a while...he has been helping out hikers since 1994. I might have met him in 1996 but cannot remember. We knew a lot of the same people.

It also turns out that Meadow Ed was the person who showed up to Cheryl Strayed's book reading and gave her back her saw. In 1995 he had helped her out by telling her what she didn't need to take on the trail, one item being the saw.

Cora and I had seen her talk in March and she told the crowd a story of how a man helped her out by telling her what she didn't need to take. Turns out it was this guy.

One hour turned into many. Yogi showed up a while later, with Yard Sale in tow. She is a bit famous on the trail in that she publishes the town guide. Yard Sale had hitchhiked into Lake Isabella and when he was hitching out Yogi had picked him up. He said he was really excited and had her sign his book.

Burgers were made and we made plans to leave after dinner. After a while I started saying my goodbyes and then Yard Sale said "you can't go! We have a 100% retention rate!". Turns out the Blur and U-Turn were going to stay. I didn't like the idea of having to do a full day into Kennedy Meadows but I stayed. Much BSing ensued. I found out that when I finished my Washington hike on September 9th, 1994....Yard Sale was only 8 days old. Argh!

There ended up being about 20 people there. Lullaby and Butters rolled in about 9pm. There was a hiker there named Cactus Jack who I had not met yet. Turns out it was because he was starting his hike at Walker Pass and hiking to Tuolumne Meadows. This was Day 1 of his hike and he had moved zero feet. Turns out he was just getting ready to walk out this morning when Meadow Ed and everyone showed up.

Ended up falling asleep on a picnic table...I haven't done this since 1996.