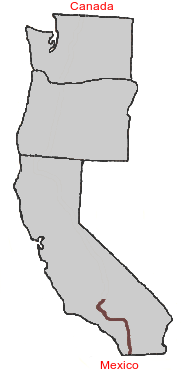 Woke up and was on the trail a little late (7:30). Saw a few hikers on the way in. I was moving at a pretty decent pace, but then I heard one of the Swedes (Laptop) behind me and I let him go around.

It was really really really windy. I had my jacket and hat on for once. Eventually I reached the Tehachapi-Willow springs road. There is a campsite right before it and I think I camped there in 1996. It was my last campsite before finishing the trail.

I stuck my thumb out and a truck stopped. They asked me if I was going to Tehachapi and I said that I needed to go to Mojave. They sighed a bit because they had just taken a few hikers to Tehachapi and came back to pick up some more. The guy told me that if the othre group of Tehachpi-bound hikers didn't show up he'd come take me to Mojave.

I walked down to the Oak Springs Road and Lightning Rod and the hiker from Ireland were there. They just needed to go to a town with a store. I told them about the truck and they went up there, then the truck came and scooped me up and took us all to Mojave.

They talked about Mojave a bit, I mentioned Mojave being mentioned in a Frank Zappa song and the driver laughed. I also mentioned the Little Feat song Willin' mentioning Tehachapi. Lighting Rod said that someone wrote the lyric from that song in the trail register near the road (somehow I missed this one).

They dropped us off at the Primo Burger joint and said goodbye. We went in and ate. A local got real chatty with the guy from Ireland. Kind of that point where you think someone is a friendly local and then you realize that they are REALLY chatty and a bit off kilter. He mentioned meeting a guy who was the first person to hike the PCT and used one of those pocket finishing rods like they used to sell on TV in the 70's. I took this with a grain of salt because there are not a lot of places to fish on a large percentage of the PCT.

As we were leaving the guy from Ireland was trying to be polite but the guy kept talking. He ended up saying "ok, see you later...see you on the mothership" to the guy. A woman nearby started laughing.

We went to the store and got a few things. I was on the fence about if I was staying or going. Mojave is a bit run down. This wasn't the problem though, the problem WAS THE GIANT AMOUNTS OF WIND. My original plan was to spend a day in Mojave, walking around checking out the town and taking clock photos. The wind would have carried the clock cardboard to Kansas so I knew that wasn't an option.

Lighting Rod offered to split the motel room so he could shower and pack up his backpack. My boxes were at the Motel 6. I couldn't find the woman who I had talked to on the phone though who made it all happen.

We spent a few hours there packing and whatnot. Saw a few hikers around the place. Lightning Rod was going to go use the pool. I looked out at the pool and there were whitecaps on the water. Nope, no swimming for me (and hardly any for him).

Eventually I found the woman who made a trip to the PO to get my boxes and I thanked her while giving her 20 bucks as a thank you. She asked if I was sure and I said yes. I would have bad to wait around Mojave for another two days if she had not have done that.

Lightning Rod and I were itching to hit the trail and get out of Mojave due to the wind and not even sleep in the motel room. We called Ted who worked for the Chamber of Commerce and he gave us a ride back to the trail.

LR took off while I got my rain jacket out of the pack and I never saw him again the rest of the night. The trail went over rolling hills in and out of the wind turbines....IN GIANT BLAZING AMOUNTS OF WIND. At one point the wind pushed me off the trail, pulled my ground cloth out of the pack, and sent it flying. I had to chase that thing down. I was listening to Sonic Youth's "Cross the Breeze" of all things too.

One more thing about the wind. When I was unpacking my boxes and loading up my pack, I had some food leftover. One was some chili, which I made outside of the motel room. That stuff gave me the WGE. It was so bad that it lingered even with the blazing wind. Maybe this paragraph should be deleted actually.

A few miles in, before the trail drops to Highway 58 there is a bench. I remember sitting on this bench thinking about how when I got to that overpass below, my hike would be over...the last part of the PCT I had yet to do would finally be finished. This time however, it was dark and the wind was howling. No time for reflection here.

I'm pretty close to the Highway 58 overpass, just about a mile south. Found a spot in a creekbed that doesn't have much wind. Excited to cross the overpass tomorrow since it has such historical value to me. Cora, Bonzi and I even made a stop at it when we were drving to Arkansas in 2007. 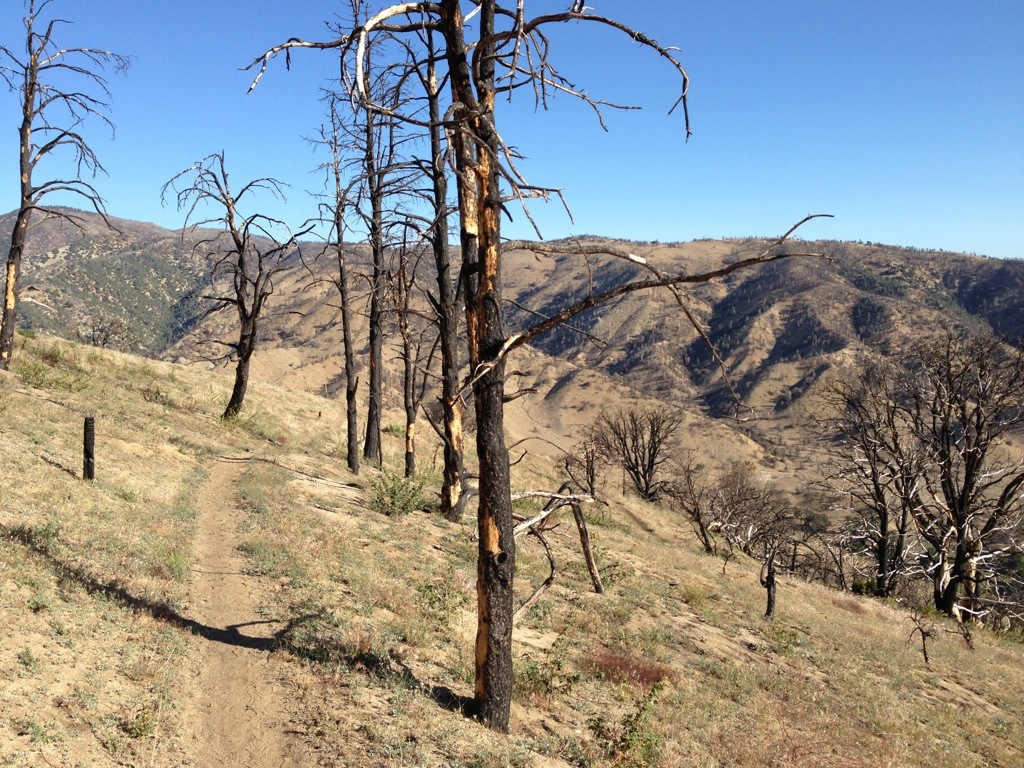