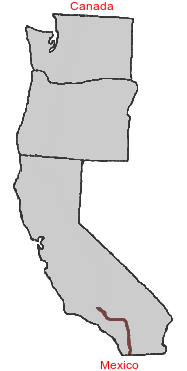 Woke up to the sound of the owls hooting in the woods. About five minutes later there was a shift change because the owls stopped and the birds started chirping. 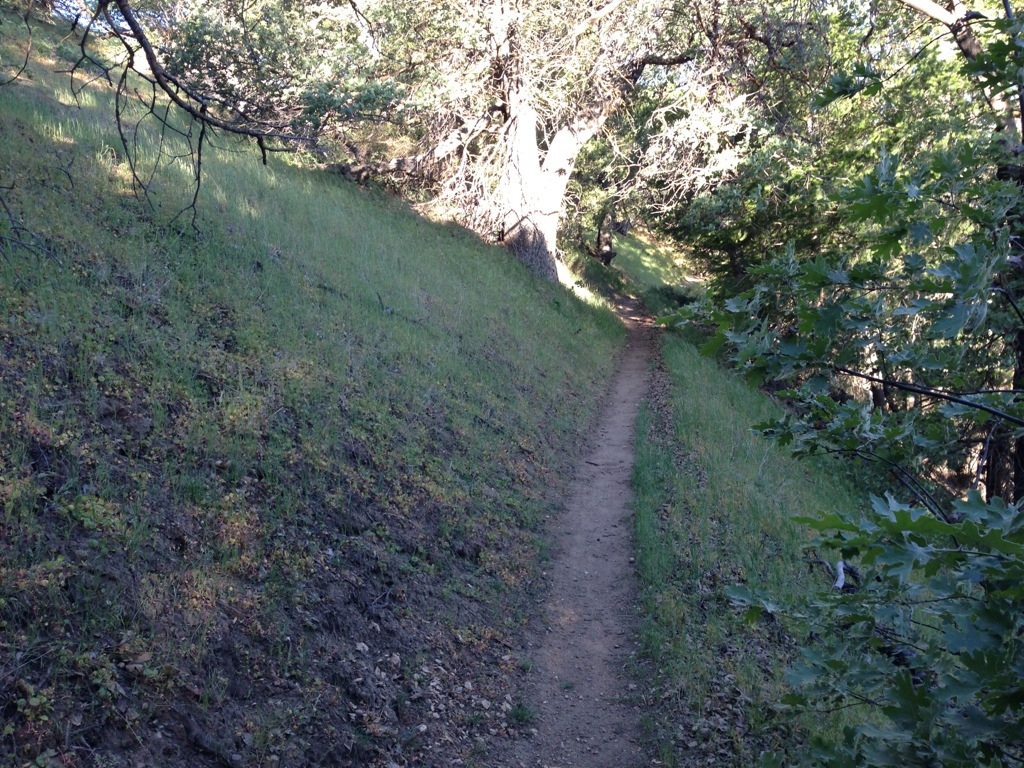 Tried listening to slower Spiritualized music for the morning but that didn't work too much for the motivation.

Got to the water cistern and saw Muk Muk and UB sitting on top of it eating breakfast. I joined them and made breakfast and coffee. Still can't believe how fast the jetboil heats up water. I liked it so much that I made a second cup of coffee. 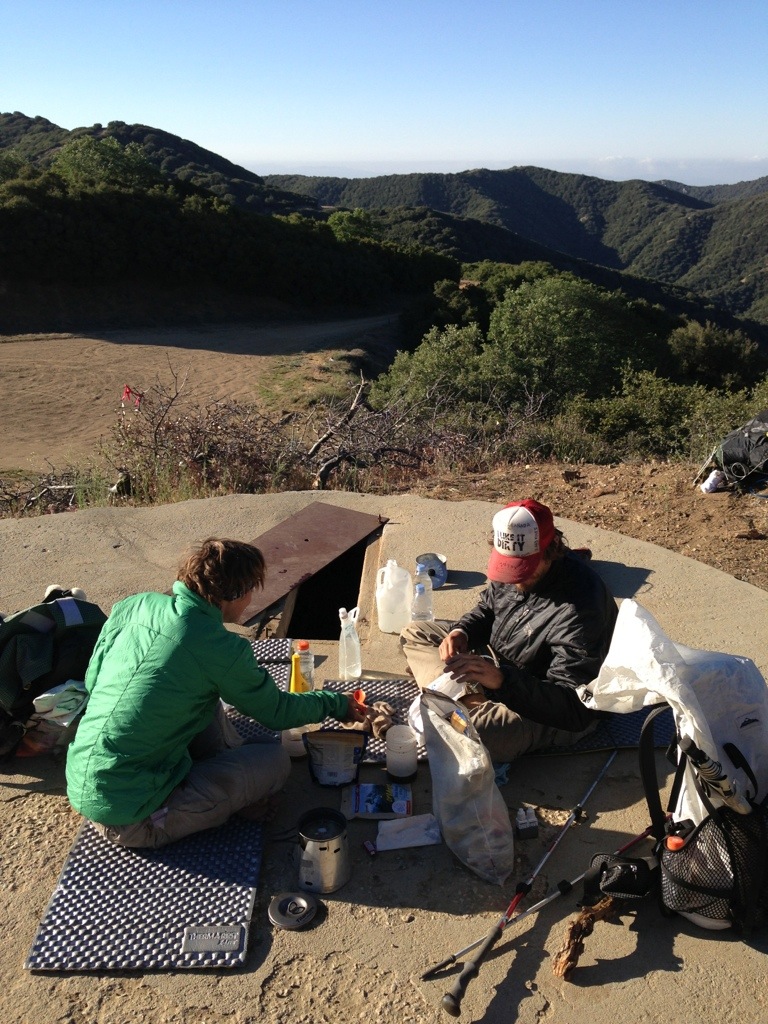 Continued along and the trail wound its way up into some nice trees. Talked to ______ and he told me how he had lost 25 pounds already. To counteract this he put a bunch of pot and munchies and was hoping that was going to work. On the other hand, I have not lost any weight but I have also been eating a lot too.

Listened to the Best Show on WFMU via podcast, it was a pretty funny show and the next three hours went by pretty quick. 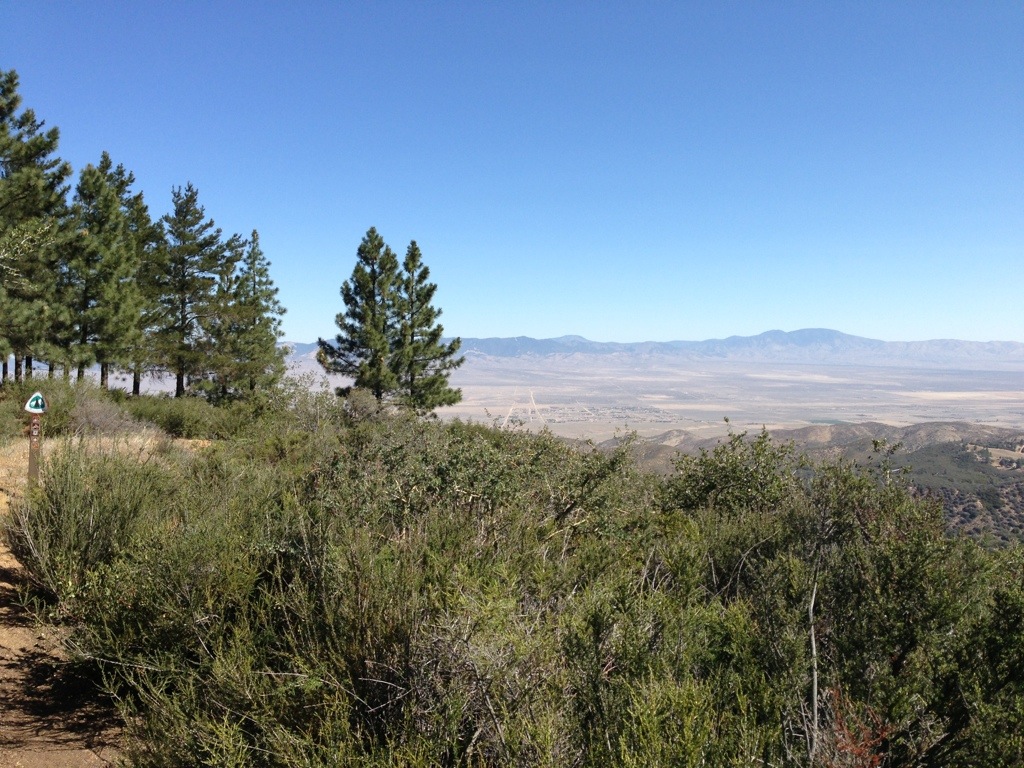 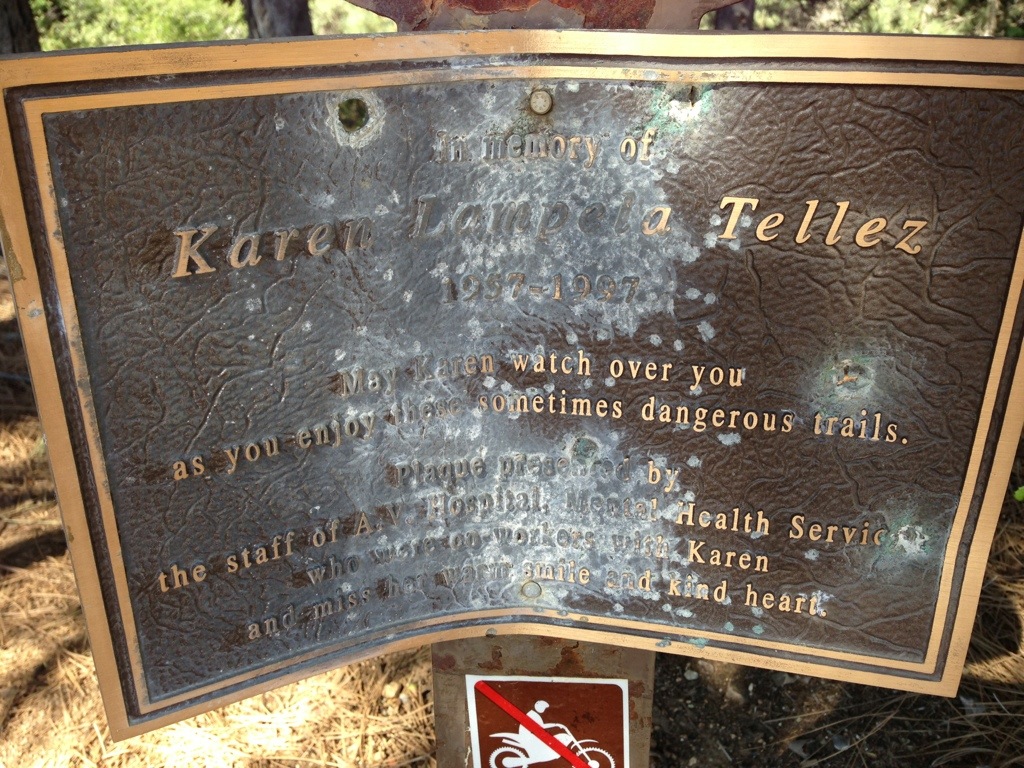 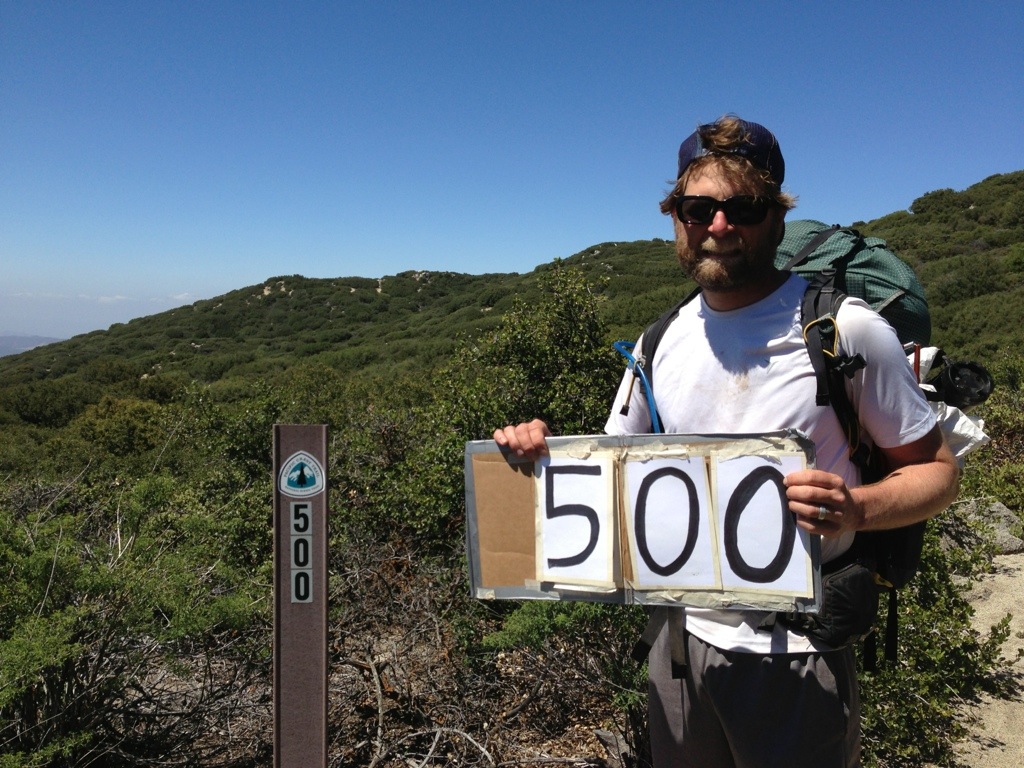 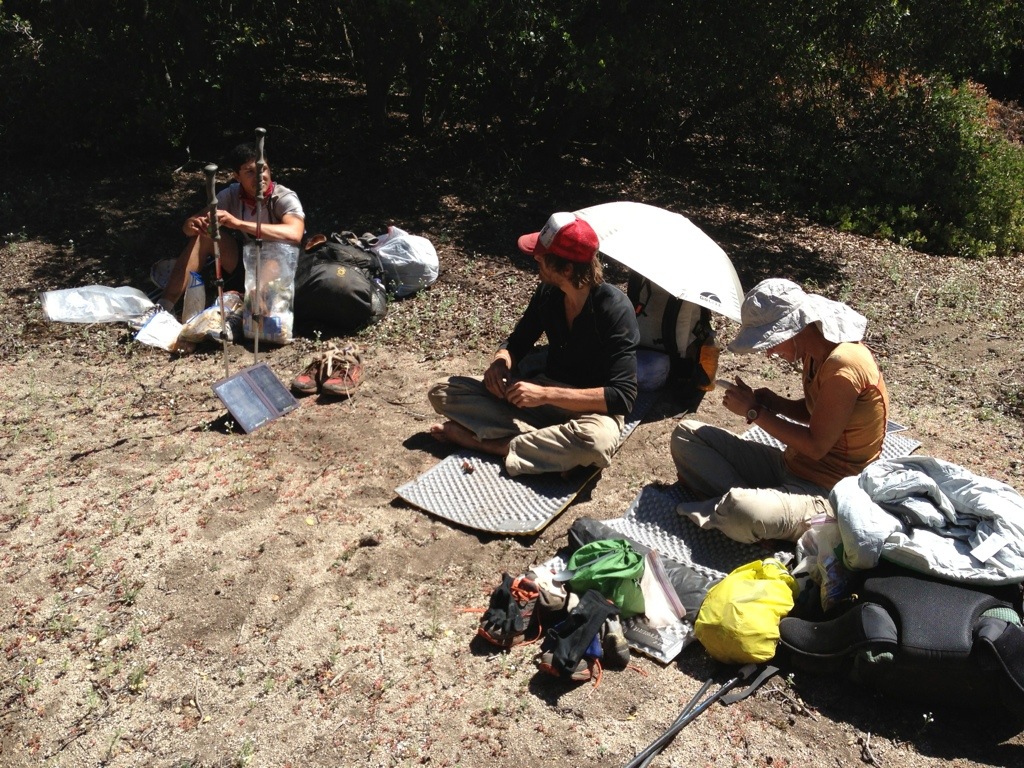 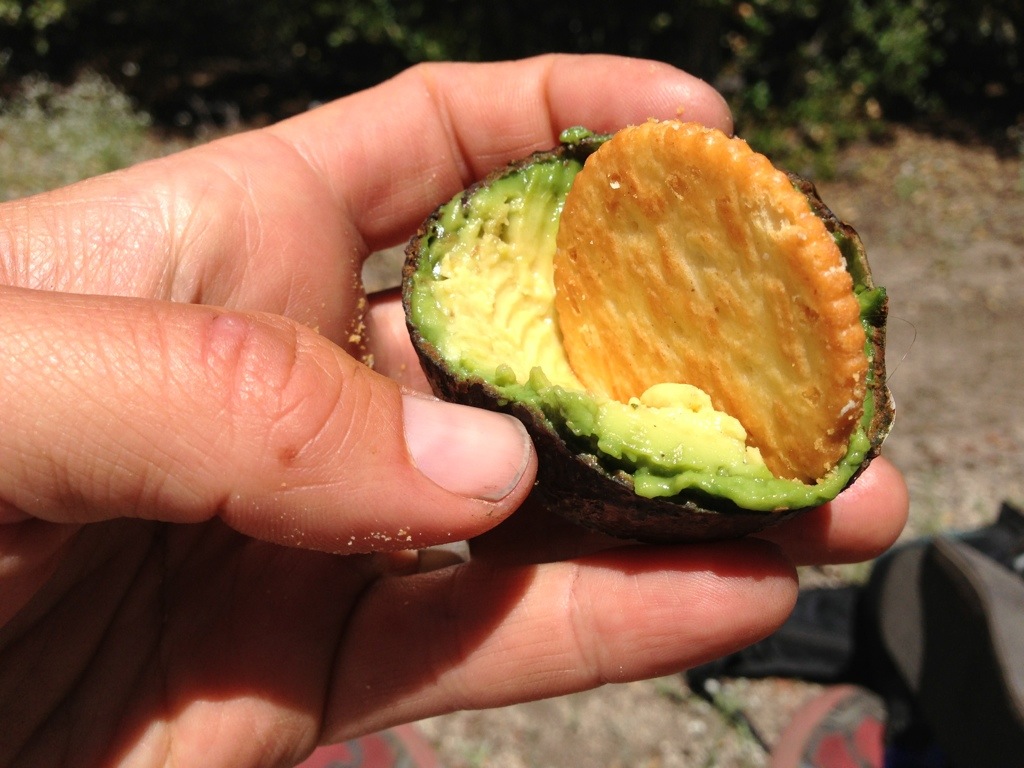 Well, the last day for these socks.. 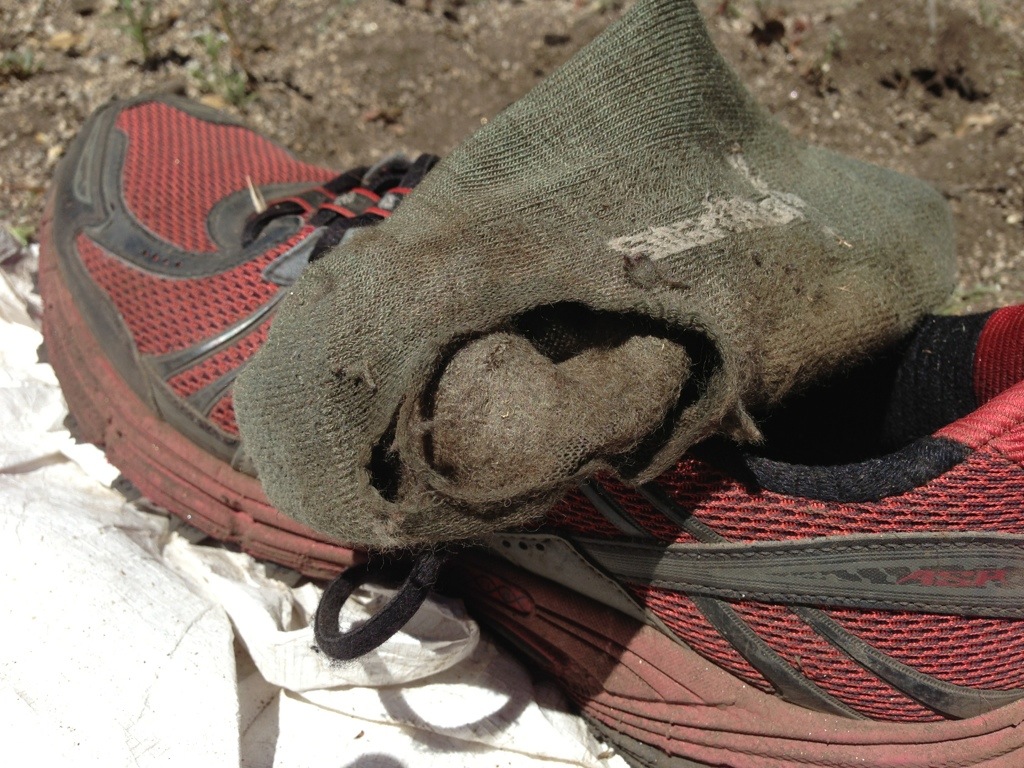 Before the trail started dropping I stopped to go pee on the side of the trail. I was singing along and everything. After I was done I looked up and Gavin was resting about 15 feet away from me up against a tree. D'oh! I apologized and he laughed.

Around 4pm I stopped at a water cache about six miles from Hikertown. I was getting hungry so I made an early dinner. Gavin, Muk Muk, and UB showed up soon after. The wind was blowing pretty hard so we didn't hang out that long. 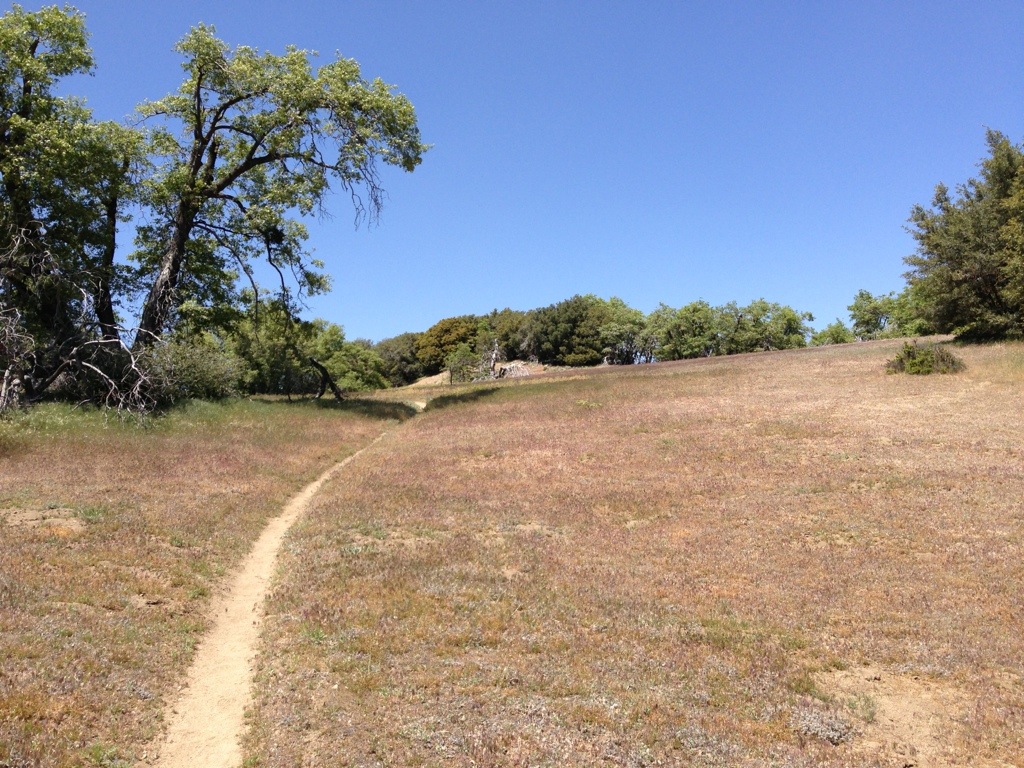 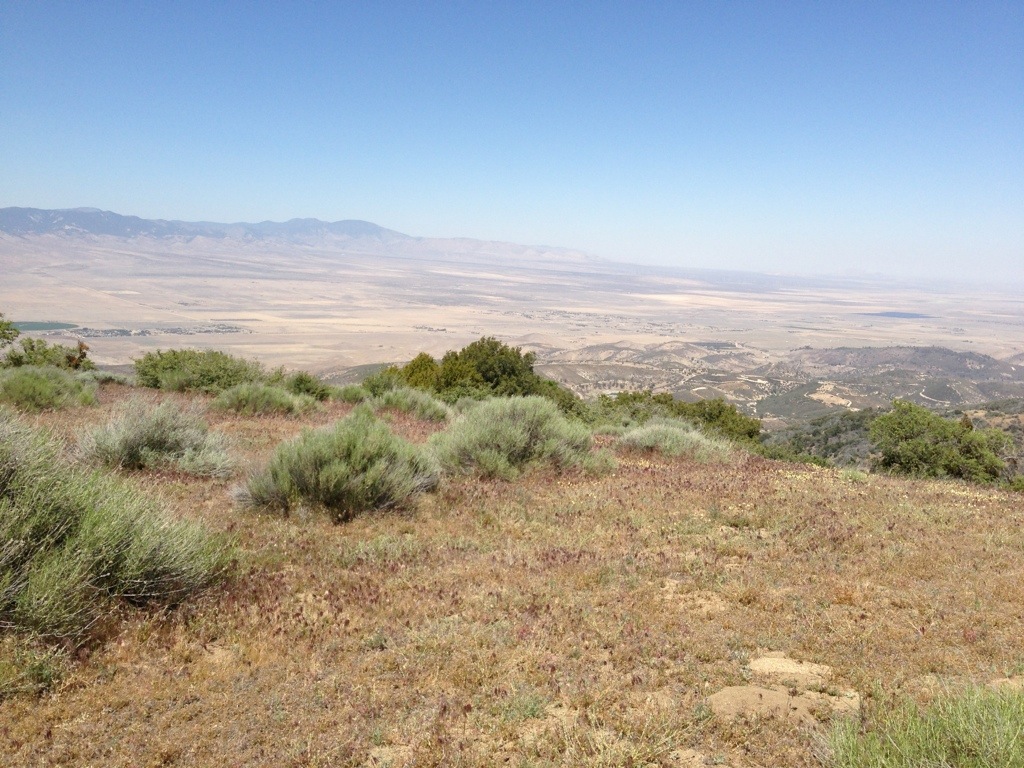 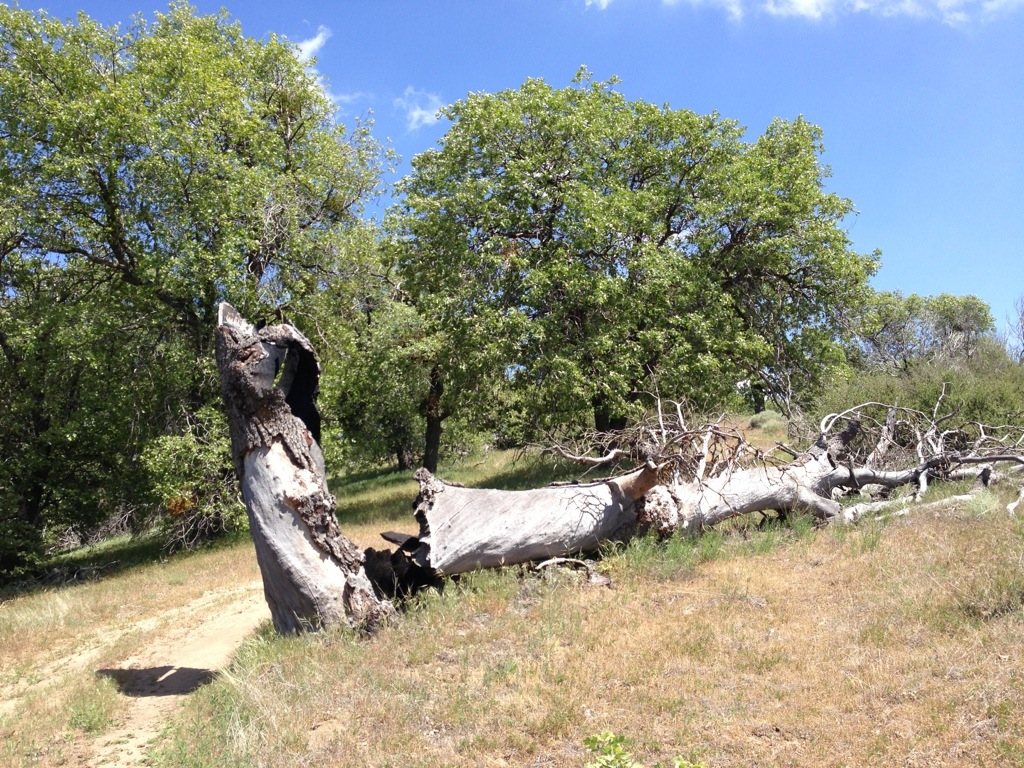 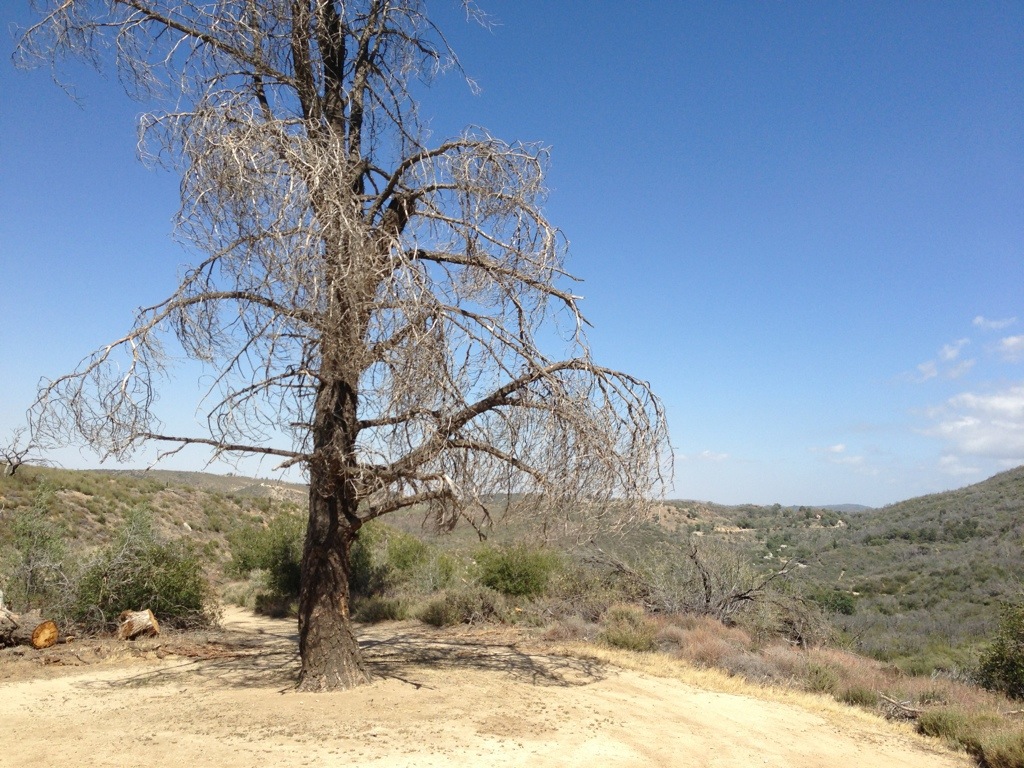 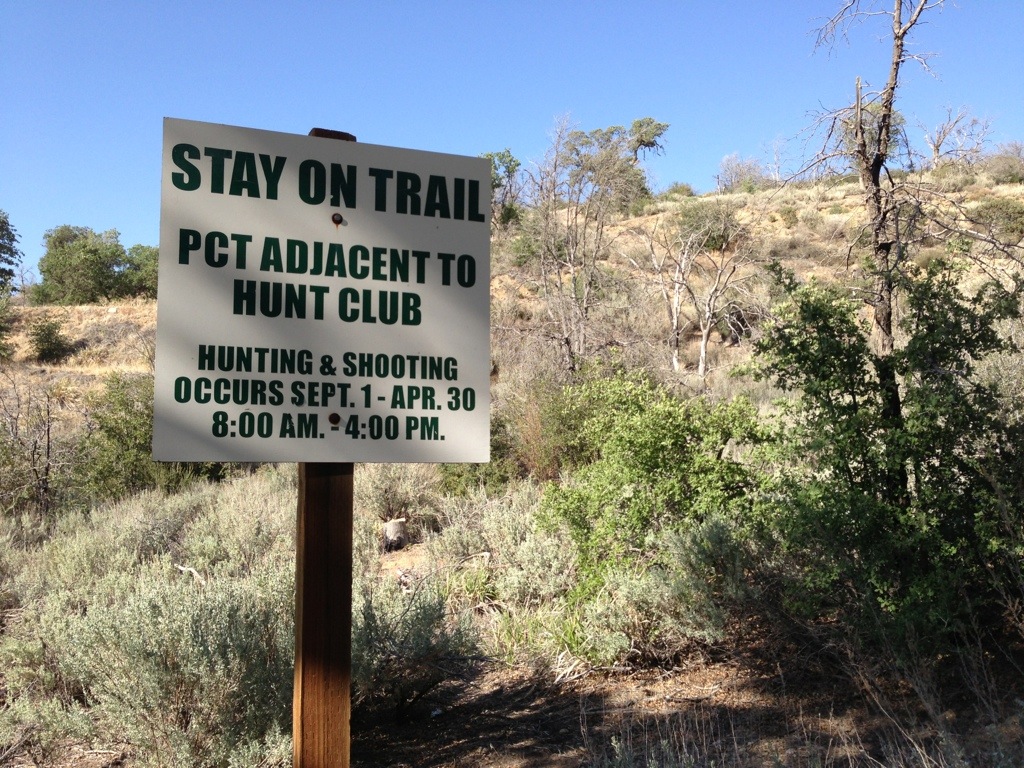 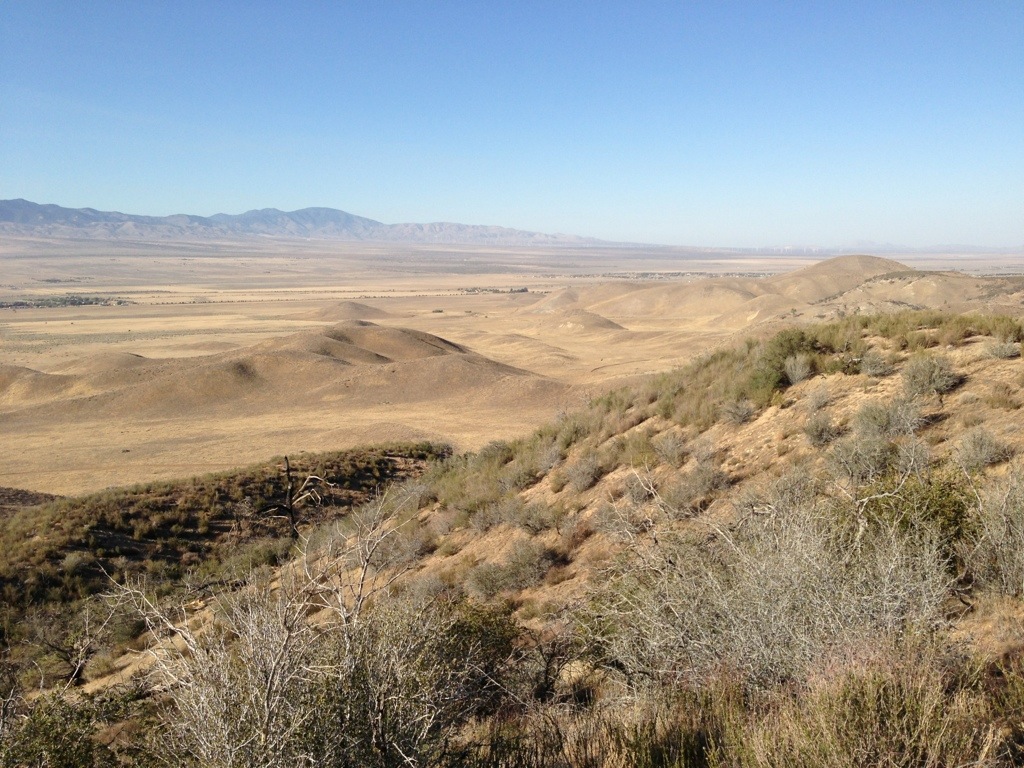 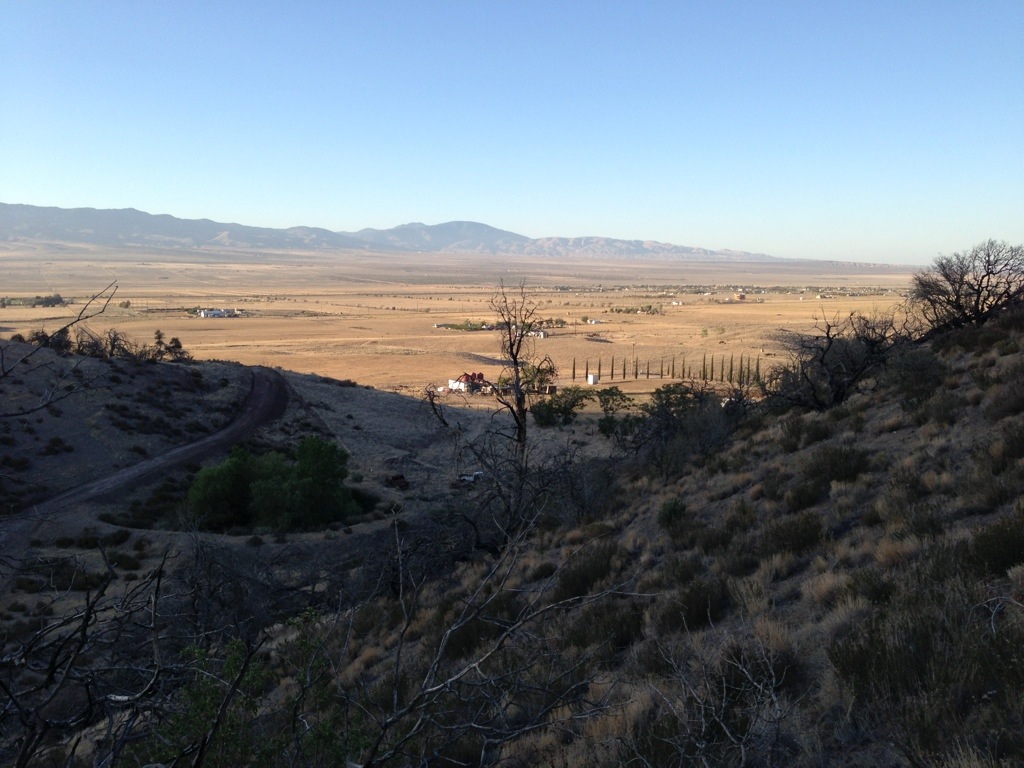 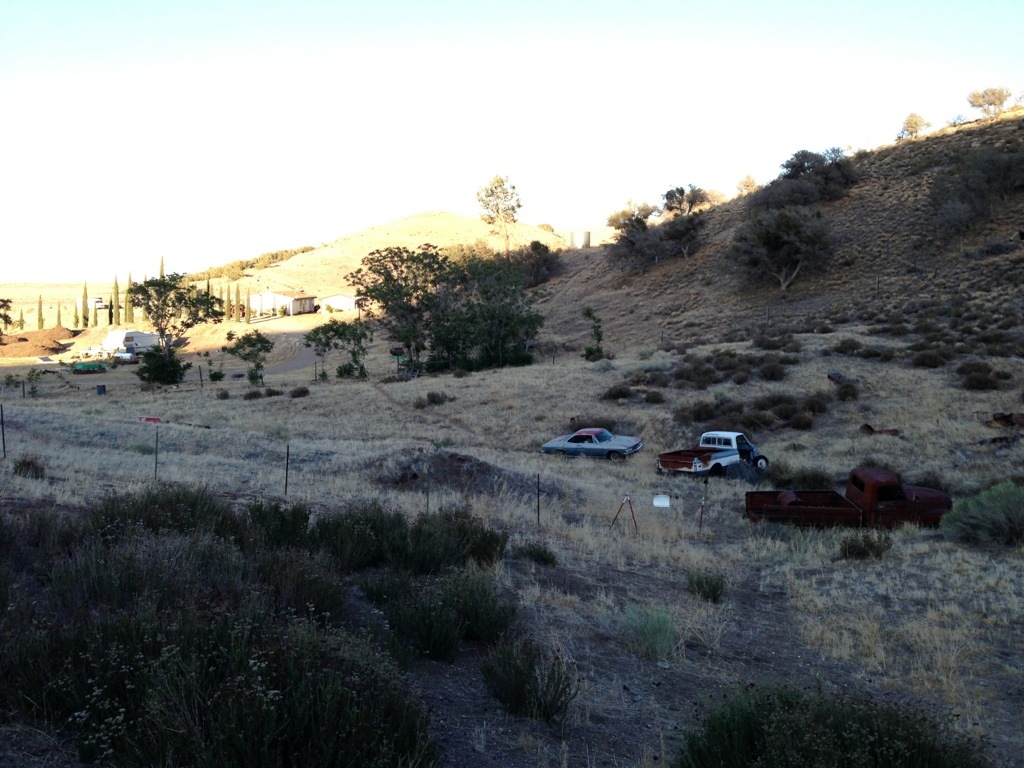 The trail went up/down/right/left a crazy amount of times over the next seven miles. The whole time I kept looking at the dirt road below which was probably laughing at me. Someone said the flat dirt road in the valley is about three miles shorter.

Got to Hikertown before sunset. The last time I was here was December 1st, 1996 when a guy named Jack Fair owned the place. The house and garage were still the same, but there were all these little themed buildings around for the hikers to stay in now. I talked to the caretaker Bob and got my resupply box. I actually didn't even really need much of the food in the box since I had enough already to get me the 40 miles to my next resupply in Mojave. Looks like I will be dumping food in the hiker box here.

I was going to stay in the "Feed Shed" but Bob made a comment about how the cat slept in there...so I opted to stay in the "Doctor's Quarters". The buildings are tiny, which I later found out that they used to be bigger but were cut in half as to not have to deal with building permit issues. Someone was in the DQ already so I told Bob and he put me in a trailer that they keep the towels and linens. The smell had the exact same smell that my Grandma Van's house had in Naches, WA. It was kind of bizarre. At the bottom of the front steps were these concrete pads with all kinds of house keys in them, I had remembered seeing them in front of Jack's house originally, but had completely forgotten about them until now.

The guy who owned the store a few miles down the road showed up to give anyone a ride to his store. Gavin, Yard Sale, and I rode with him. The owner (I missed his name) had lived in the area over the last 20 years. He was telling us about all the people who had died in the nearby canyons from exposure. A lot of people will go out for the day and not realize that it gets down to 50 degrees at night, that or not carry enough water and die from dehydration. He said that he used to have a bloodhound and he would get a call when someone turned up missing.

He told us the last time that he and his dog (I didn't get her name either) went out to find someone, they ended up finding the body in a canyon. He said his dog didn't eat or move for three weeks, she was so sad. I had no idea a dog would go through those kinds of emotions over seeing a dead body. He said "oh yes, they know....after she started eating again I put an end to her days of going out on rescue trips...I didn't want to put her through that again"

I got a bag of knock off Cheetos and had eaten most of them by the time we got back to Hikertown. I saw some folks in the main house and realized that I had sort of missed dinner. I went in and they said they had just finished. The guy in the kitchen, Richard, was the owner. He offered to make me a ham sandwich so I said sure.

It was a little surreal to stand in the living room where I spent two days in 1996 (see below). My memory of the kitchen was different, I had remembered it set up a different way. I talked with Richard for about 2.5 hours. He got really excited when I told him how I had spent a couple days with Jack and had a few photos.

He told me how after they had bought the place they had gutted the house since it was in shambles. I felt a sense of relief when he told me that they had completely gutted the kitchen and rebuilt it a different way...so my memory still kind of in fact worked!

Richard had all kinds of stories and it was really interesting to hear the ins and out of running an international business. His company makes a product which makes fuel burning a lot more efficient with a lot less byproduct so less maintenance needs to be done.

Richard also had worked on the original Gone in 60 seconds movie and he said a bunch of the props and cars from the film were around the Hikertown compound if you looked hard enough.

Richard had bought this place in 2001 after Jack died. He and his wife live near LA but they decided this place would be a good place to spend some time away from the bustle of the city. The first night they stayed at the house Ricahrd's wife yelled at him that there "are some hobos setting up camp in the front lawn!"

Richard got to talking with the "hobos" and found out that they were PCT hikers. He still didn't know what to make of the situation. Upon hearing that one of the filthy hikers was actually a psychologist in Beverly Hills for the last 25 years, he thought to himself "oh! These are not hobos!" Long story short he and his wife made it a place for hikers to stay before heading out onto the LA Aqueduct portion of the trail.

So yes, Jack Fair. Probably one of the top five memories I have of hiking the PCT in 1996 was the two days I spent at Jack Fair's house.

During my 94/96 section hike of the PCT, the only part I had left to complete was the section from the Mexican border to Tehachapi, which I did in November 1996.

Apart from a few southbound hikers, I was probably the only northbound hiker on the PCT at that time in that area. Therefore I was a bit of an anomaly when I showed up at Jack Fair's house a couple days after Thanksgiving 1996.

I remember it being a sunny day but the wind was blowing super hard. The PCT guidebook listed Jack Fair's place as something like "home of concerned citizen Jack Fair, you can camp on his lawn and get water".

As I approached Jack's house I heard his dogs barking and later a figure appeared in the doorway outside the house.

"WHAT THE FUCK ARE YOU DO OUT THERE IN THAT WIND? GET THE FUCK IN HERE!", he yelled.

I introduced myself and Jack said hello. He offered to take me to the country store down the way so I got into his car and he drove me down. I bought a few things and we came back.

It was about 3:30pm when we sat down. We stopped talking around 10:30pm. Jack must have smoked a carton of cigarettes while we talked. I have a lot of stories about Jack but I'll have to tell them elsewhere. Quick example: I told him a story about my dogs and he got a little teary, got up and gave me a dime. Later, he told me a story and then said "Good story huh? NOW GIVE ME THAT DIME BACK MOTHERFUCKER".

He also had these amazing wood carvings that I wonder what happened to them. He committed suicide in 2001 and I regret not having him carve me a chess set, I think he would have liked doing it for some extra money.

Where Jack talked to me for seven straight hours in 1996: 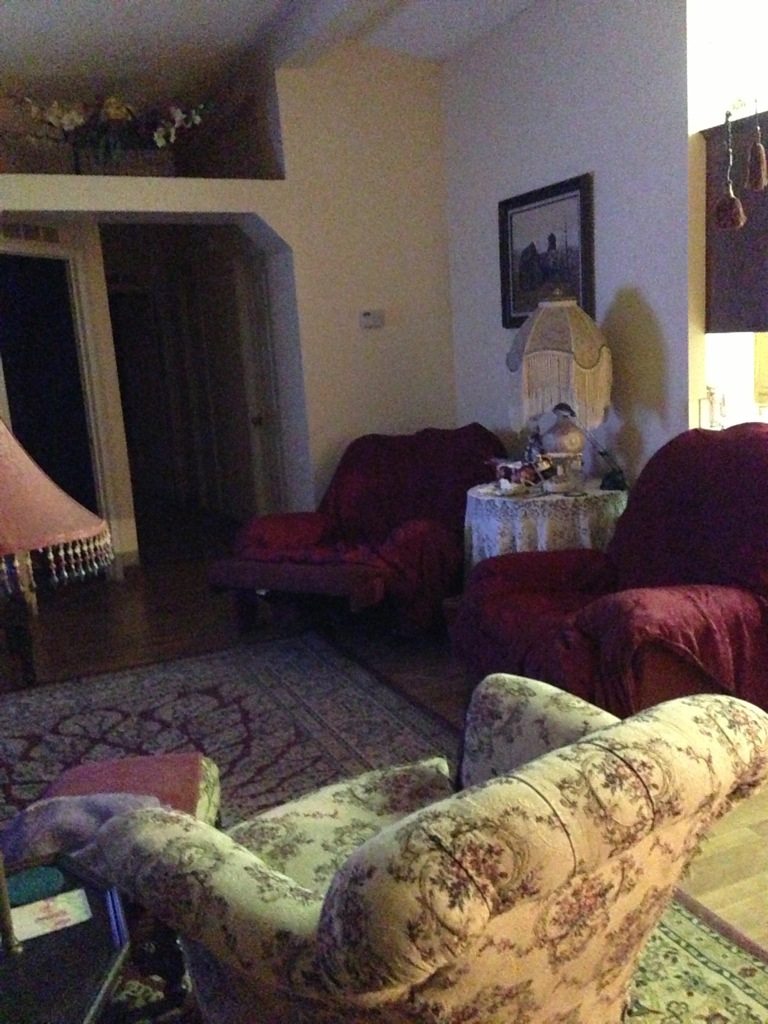 Richard making me a ham sandwich: 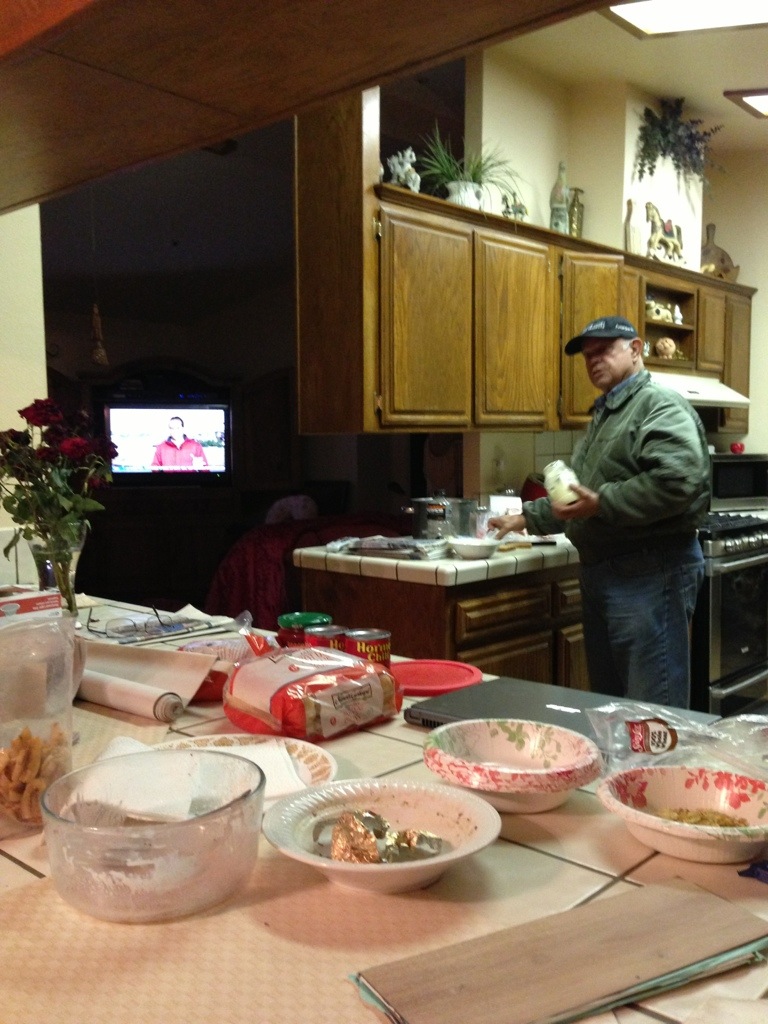 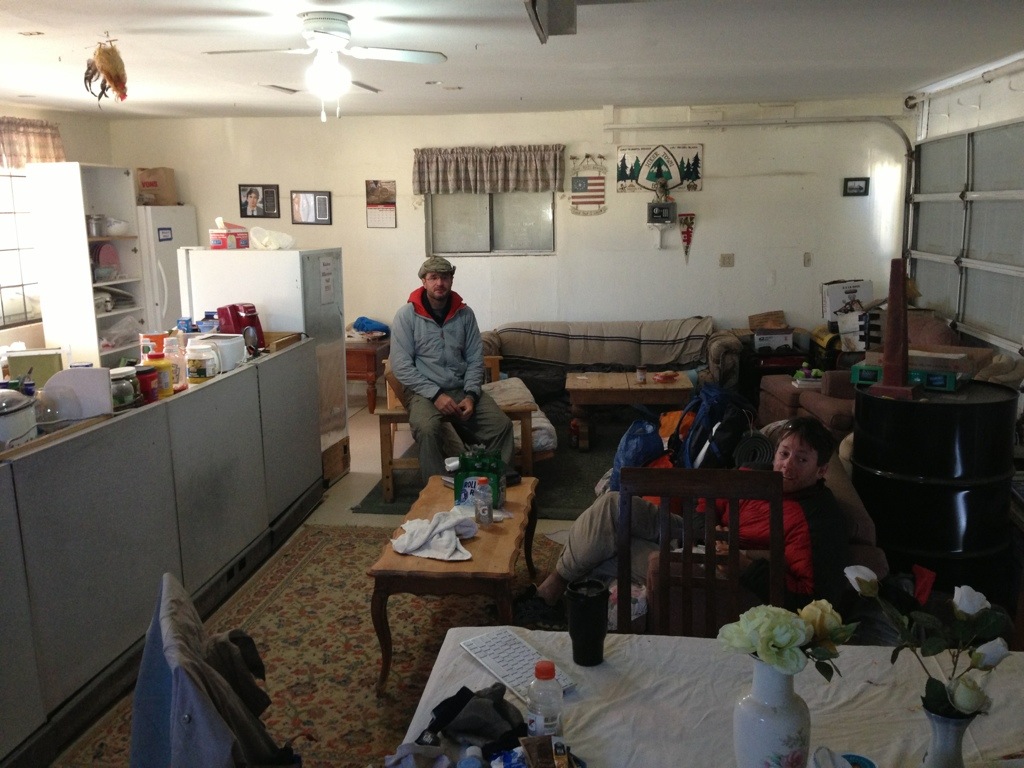 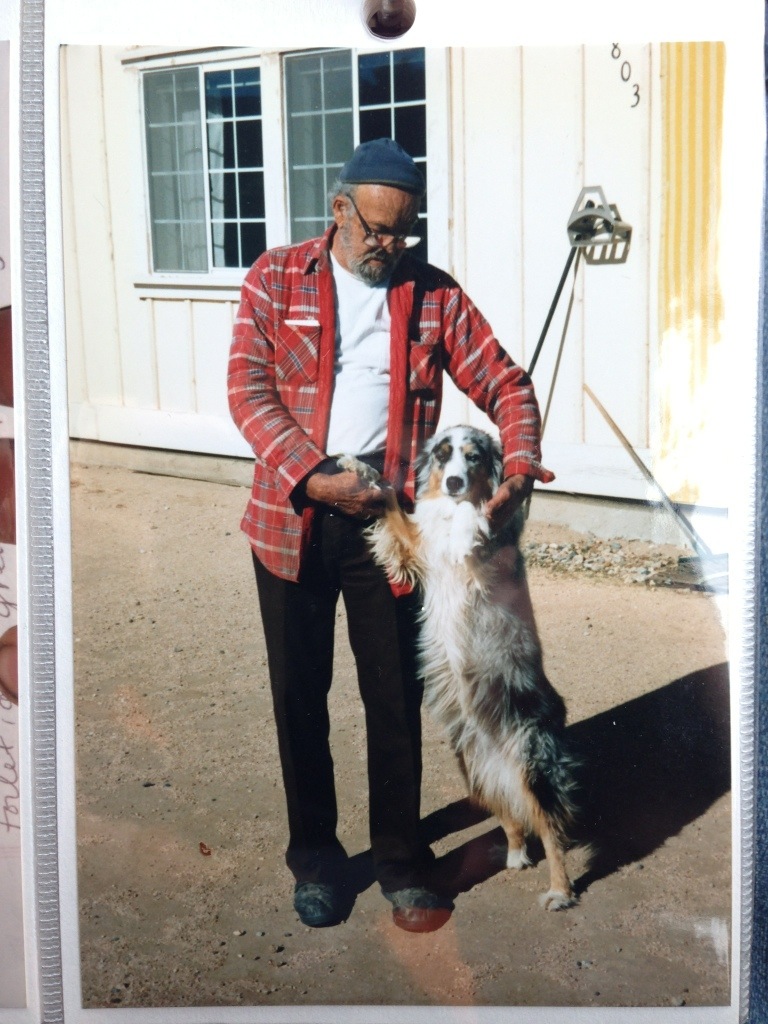 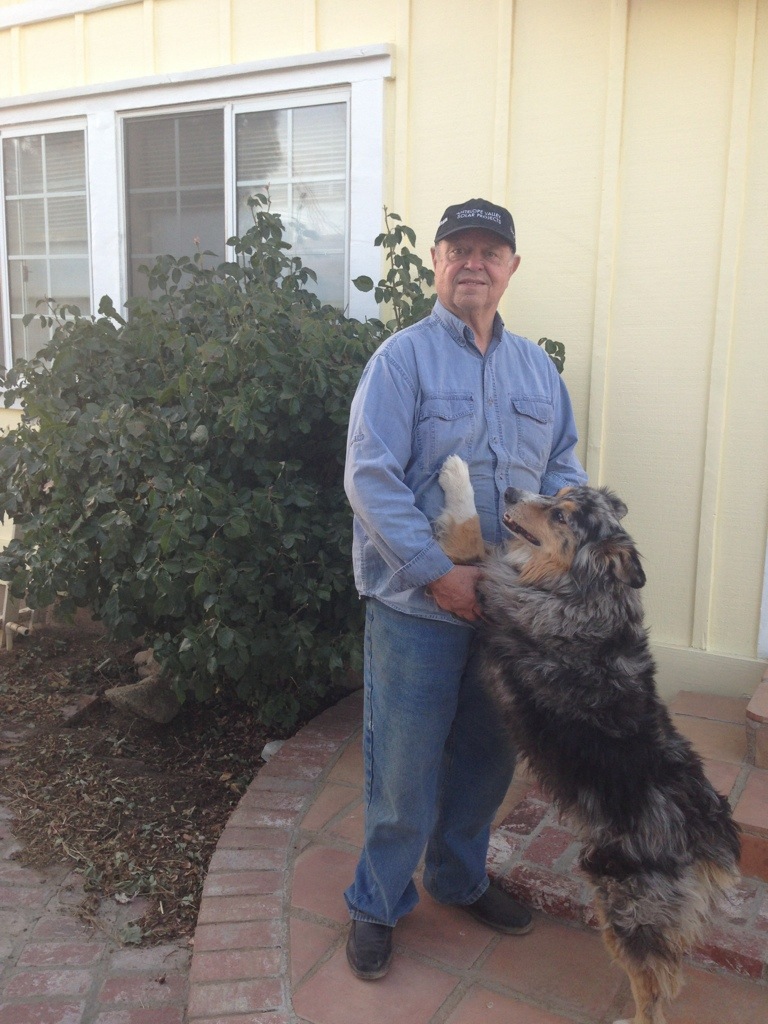 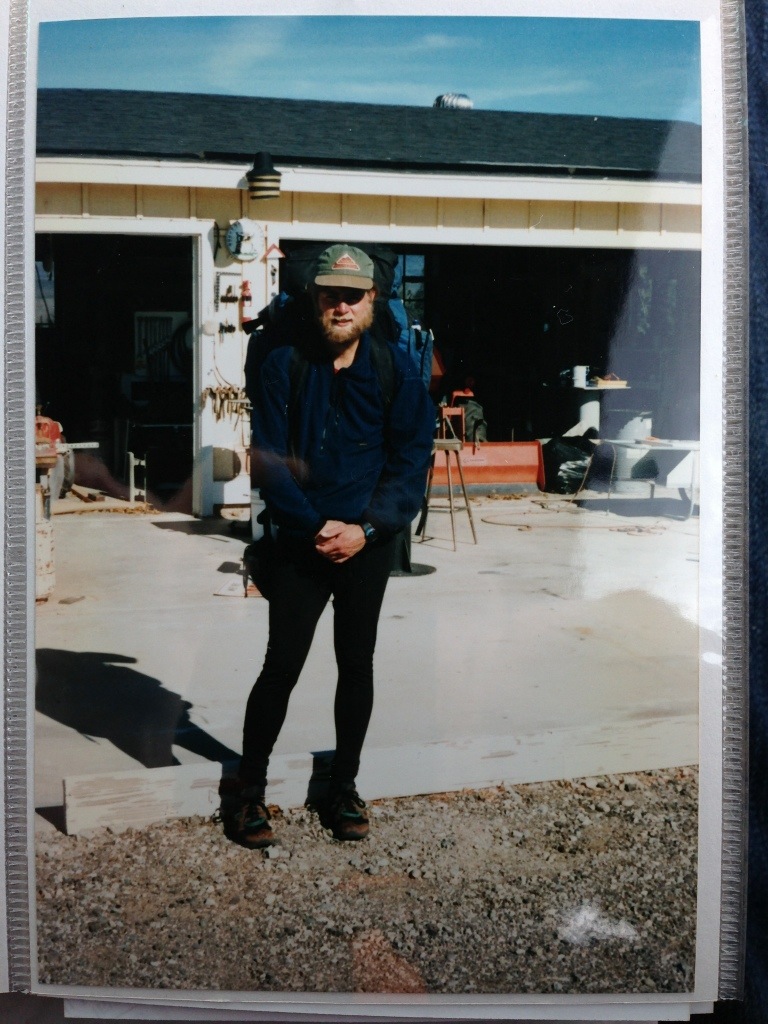 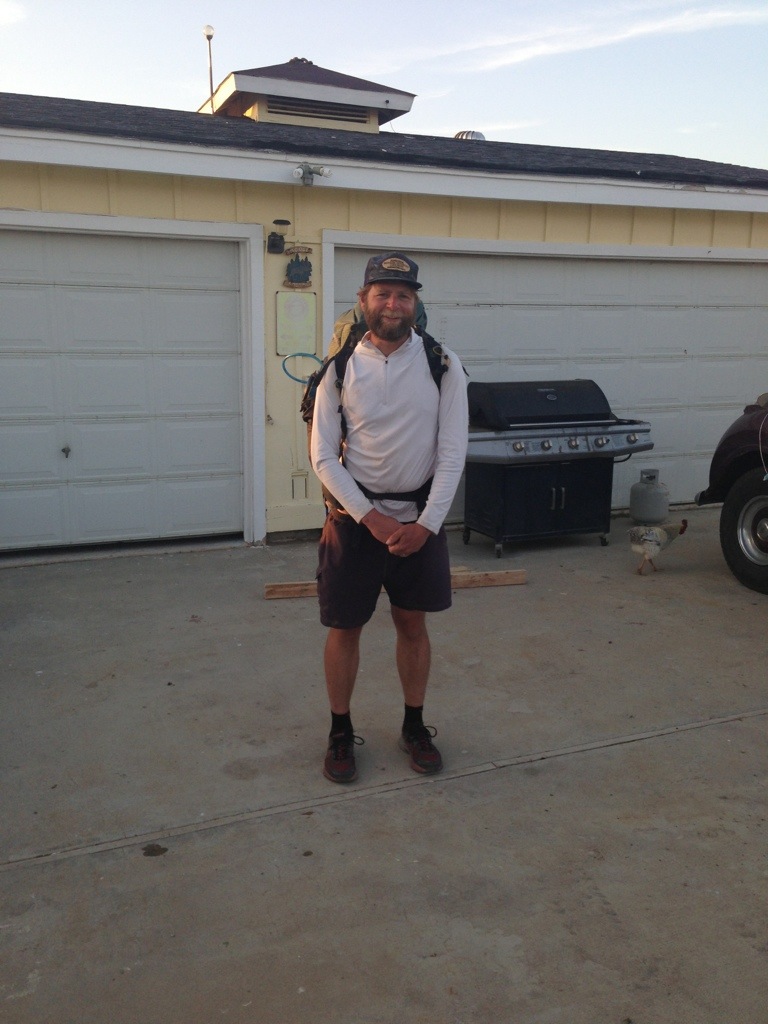