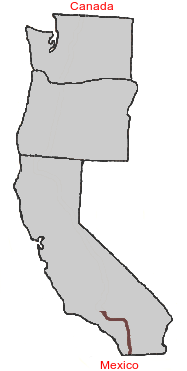 Woke up and my sleeping bag had a huge layer of dew on it. I packed up and hoofed it to the North Fork ranger station.

Oh, forgot to mention all the helicopters I heard last night. At the North Fork ranger station there is a helipad that was getting some use. For some reason I felt I needed to shut off my headlamp before they passed by.

After walking a few miles I saw the ranger station and the helipad. This is where the trail "turns right" and starts heading north again. The westward crawl was done.

Had a pretty fast drop down to the Soledad Canyon Road near Acton. Today around 2pm was a month out. It looks like I made it about 440 miles taking three days off and a lot of half days. Not too bad.

There is a KOA campground near the PCT just after Soledad Canyon Road. The turnoff to the campground from the PCT isn't exactly welcoming. There is trash everywhere and there are several RVs and trailers. One hiker later told me that he saw a couple having a stereotypical trail park domestic argument.

Got to the KOA and it was really nice. I saw Larry out sleeping on the lawn. He had been there for a few days. Lucky had taken off a few days earlier. Larry said that the KOA was a better place to hang out and wait for his brother rather than further up the trail.

I was planning on doing another five miles or so which would leave an easy five miles into Agua Dulce. That didn't happen. More hikers showed up, Larry offered to drive us down to the store and get beer. You know the rest.

The two restaurants in Acton offered delivery out to the KOA. Some of us ordered pizza and others ordered from the Chinese / American / Mexican / Italian restaurant. I figured the latter would be better because they were so skilled at cooking different cuisines. The pizza showed up pretty fast but the other restaurant took its time. They basically stacked up orders for up to an hour and then made a delivery.

Eventually there was about 25 people or so camped in our area. Tomorrow is a 10 mile push into Agua Dulce.