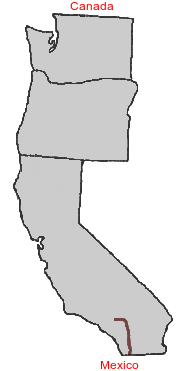 Was up at 6am and went to Breakfast. Saw a few hikers, met a new guy named Charlie. Saw Larry and I asked if Lucky had left, he laughed and said, "Yeah, he left at 6pm last night!".

Took my usual a while to get physically out of the hotel. Larry had offered me a ride but I went by his room and told him I kind of wanted to walk back to the trail.

When I went to checkout there was another hiker there . I introduced myself and he said his name was Scott. I asked if he was " postholer Scott " and he asked me if I was PCT planner Craig, It took me a bit to realize that he

was in fact Postholer. We have exchanged several emails over the years but never have met face to face. He runs a pretty extensive PCT site called postholer.com.

I left the motel and made my way towards the trail. As I walked past the green grass of the Chevron I heard a "Craig!"

There were about 10 hikers there hanging out. I joined them.

That is the sound of the next seven hours disappearing.

It was a bit hot outside...too hot to be hiking so I didn't really feel the itch to get back on the trail.

I met several new hikers there over the course of a few hours. I think we must have drank four 18 packs of beer too. One hiker I hadn't met before was from Iran. He has a really funny sense of humor and I hope to see him on the trail up the line.

Around 5pm I got the itch to leave and said goodbye. The trail goes through a really long, curving, creek tunnel under I-15. I stopped to take a few clock photos and a few other hikers soon joined me. Joe and Nancy showed up...Joe carrying an 18 pack of beer. He found out there was a garbage can up at the water cache so he was going to utilize it.

About five of us hiked together until the first water cache, the last 30 min with headlamps. At one point we crossed a set of train tracks so I did my token move of people posing for band photos.

After we had our headlamps on and the guy in front of me stopped all of the sudden. I figured it was for a snake but couldn't see anything. Turns out it was in fact a baby rattlesnake. It moved across the trail but stopped to coil itself up a couple of times as if to say "Look at me, I'm tough". It quickly uncoiled itself and went off down the hill.

We reached the water cache about 9pm and six miles up the trail. Although it would have been a nice night to continue the night hike, I was quite exhausted from the beer so I made camp with everyone else.