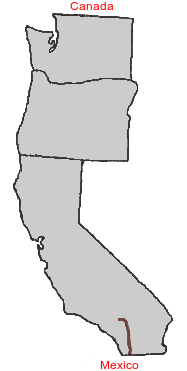 Woke up early and got packed up. Took a clock photo of Carolyn and we said goodbye.

Had an uneventful walk to I-15. The only thing out of the ordinary was a dune buggy driving on one of the powerline maintenance roads.

I reached the turnoff for the McDonalds and gas stations. In one of my 1996 photos of the area there was a Route 66 era looking restaurant and such that looked to be falling down. That was all gone now.

Went to the McDonalds and since it was a Saturday morning the place was a complete zoo. I sat outside and had some coffee and food. Their wi-fi sure was fast.

Got to the hotel, got my room, and my pack exploded its contents all over the room. Did all of my "chores" (washing/cooking pot, rinsing water bladders, pulling out all bits of trash from every crevice of the pack).

This area is a pretty good place to spend a day off. The Best Western has a pool and breakfast. They also hold boxes for PCT hikers. There are three gas stations in addition to the McDonalds. Subway and Del Taco are your other food choices. I did the rounds of the gas stations looking for headphones. I asked the girl at the Chevron if they had headphones. "We do...but I don't know if they will work for you?".

"They are really glittery", she said.

Turns out they were hands-free headphones for a cell phone. Eventually I found some headphones at the other gas station. Got some beers and went back to my room and then went swimming.

Saw Lucky and his brother Larry, they were staying a few rooms down from me. Lucky was itching to get hiking and didn't know how long he would be spending time there.

Watched Anchorman and then remembered I needed to get some Heet for my stove. The two gas stations near me didn't have it so I walked all the way back to the Chevron. Ran into Corey and Porter who were hobbling towards the hotel. They had gone 22 miles which had been their longest day so far. They had some extra Heet since they were resupplying in Wrightwood.

Ran into a few hikers and they said "wow, you look clean" (I was in m town clothes). I said I debated about just going back out onto the trail, but then thought: "VISA, TAKE ME AWAY!"

The Chevron didn't have any Heet so I walked to the McDonalds to get some sort of ice cream concoction. Outside was a guy traveling on his bike. The bike had all kinds of stuff loaded onto it. He asked if I could get him some McNuggets. I detest those things and said I only had enough to get a burger or something. He really wanted those McNuggets. I've bought food for homeless people a lot in the past, but this guy seemed like he was trying hard to fit the stereotype that a lot of right wing AM radio talk shows have when it comes to the homeless. (gimme gimme, etc). I got the ice cream and gave the guy the burger. He thanked me but I could tell he was a little bummed.

Went back to the hotel and did laundry. Got the pack imploded and am ready to leave tomorrow.