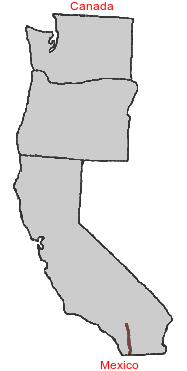 Whitney Houston got up around 6am and I soon followed. He was heading out in about an hour or so. The weather still called for isolated thunderstorms so I wasn't so hot on leaving town. Well, the actual reason was I had to get this website sent out and mail the laptop up to Agua Dulce which is about 200 trail miles away.

Once in town it can be really hard to get out. The backpack explodes everywhere and you can spend 30 minutes trying to figure out what you can leave behind. The hostel was selling Heet for $4.00 a bottle, but I saw an auto parts store near the Wargames 7-11 so I held off. I liked the idea of walking into an auto parts store to buy fuel for my campstove. (spoiler alert: I saved $1.50 by going to the auto parts store). Having my laptop near me means all kinds of other delays. I have a lot of flashbacks to Australia when trying to leave town. Gotta copy off all photos, get the website updated, fix bugs that people finally noticed, back up photos, etc.

Around 7:30am I saw the giant boat-like station wagon leave with about five hikers packed into it. Ah, someday I will have an early town departure.

I got my crap out of my room so they could clean it and I dealt with writing a script to organize the files on my music player (it doesn't like 10,000 music files in a single directory). Got the website online and sent out. Lion King came into the room and put on a VHS tape of the movie The Beach starring Leo DiCaprio. It made me think of Thailand where Cora and I were only six months ago.

Oh, a funny story about Lion King. Yesterday Spoonman said "Oh yeah, he was on some TV show called 'Killer Karaoke' a few years back, won a few thousand dollars" Turns out he had dog shock collars attached to him while he sang the Allman Brothers' "Ramblin Man"