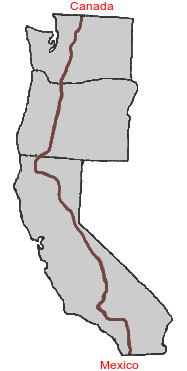 Thankfully I have dry clothes because it is pretty cold. Somehow my shorts dried out today just by wearing them and putting my rain pants on overtop.

The sky was partially blue this morning when I woke up, but knew it wouldn't last. Was barely on the trail when I saw two deer come strutting over the Brush Creek Bridge. Got some decent video of them.

The trail immediately started climbing about 2500 feet. The weather of course turned cold and snowy. When it is pretty cold at least my rain gear doesn't annoy me.

I kept thinking of that film on Chief Joseph how they are near the Canadian Border...how one guy says "Canada is only two sunsets away!". It is two (metaphorical for me at least since it is cloudy) sunsets away.

The day mostly alternated between me being too hot or too cold. Stopped at Harts Pass and used the bathroom, then continued on. Looked at the register and saw that Leftovers, Travis (Trout), and Sailor Moon must have passed me when I was in Winthrop.

Towards the afternoon I figured out about where I was going to camp. Due to the weather I can't just camp anywhere, so I need to stop a bit earlier than normal. Going down a ridge I saw a hiker in a yellow rain jacket walking the other way as me. I kept waiting for them to appear and then I realized they were on a switchback below me..heading north.

I caught up to the person. They didn't hear me so I just said "hello!". They got off the trail, turned around, and it was Rabbit Stick! I hadn't seen him since Red's Meadow around 1700 miles ago. I had heard he was in the area but had forgotten about it. He asked who I was, and lit up big when I said "OTC". He was really surprised to see me since I had gotten far ahead of him. I told him how I was doing Washington a lot slower, plus I was meeting my wife on Wednesday.

We ended up walking another 1/4 mile or so and made camp at the campsite. We chatted for a bit from our respective tents. Mostly just getting caught up on trail gossip. He said that Brownie got bit in the hand by some drunk hiker's german shepherd. There were a few others I am not remembering at the moment. He did tell me about eating lunch in the bathroom at Hart's Pass, then later a Canadian couple came up to use the bathroom. He got to talking to them and they gave him a couple huge sandwiches. He said it was one of his favorite gifts he has received in a while, especially at this moment. (today is his fifth day in the rain).

Tomorrow is the last full day on the trail. I guess Wednesday is too, but if plans work out the way I hope I will only be going a few miles to the border and camping with Cora.

Kind of hard to believe it is all ending. This weather though is a huge distraction on any kind of reflective thoughts. So you will have to wait for those. Only thought in the last couple days is just to keep moving and stay warm. I wish the weather would have been better these last few days, but I had a pretty good knack for being in town when the bad weather hit, so I guess I have to pay a few more dues.

Ok, bedtime, I'm getting pretty cold and the rest of my body needs to be in the sleeping bag. Getting to bed at 8:45pm tonight. Ate, tried drying gloves over the stove, journal typed, photos queued up...I think this might be a record.

Oh also, happy birthday to Bruce Springsteen and Ani Difranco. I am not on celebrity birthdays, but since I know Bruce's somehow I new Ani's too.