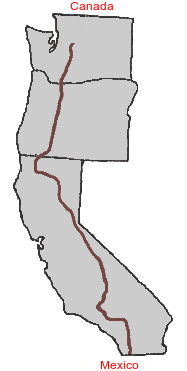 Today was a lot of the usual busy work. Had to copy off about 160gigs of memory cards to the laptop, then back the whole works up to the hard drive that I am carrying in my pack.

Midnight Chocolate and Cowgirl showed up around 11am. They asked if I had made it to Shelter Cove in Oregon in time. I had met them at the Crater Lake rim on the day I did 54 miles. I told them I did in fact make it but my friends were gone...although that was a moot point, it was still an incredible experience. I told them how I would be really happy one moment and crying the next, then happy again 30 seconds later.

"Now you know what it is like to get your period", Midnight Chocolate said.

Jerry gave Gabe, LETITBE, and I a ride up to Skykomish. I needed to send off a blog update with the bar wifi and Gabe needed to get some food. He is going to walk with me up to Stehekin and then head home.

Jerry told me the post office I had a photo of was behind the hotel and is now torn down. Burlington Northern had to do some sort of ground contamination thing and they dug up all the dirt in the surrounding area around the tracks. The hotel got jacked up and the PO torn down, and they cleaned up whatever mess it was in the soil. The PO hasn't been rebuilt yet.

As we were driving Jerry mentioned that he had "260 Air Conditioning". This meant having two windows down and driving at 60 miles an hour. Jerry is working on the school busses in the area doing maintenance and he had some business related to it in Skykomish which is the reason we are going.

Gabe and I went to the cafe and ate lunch. LETITBE was going to have a quick look inside the bar, which meant a quick beer and watch sports on TV. He showed up a while later. Jerry came by and sat with us. Jerry made a joke how when he was in the 7th grade here they automatically put you on the basketball team since they lacked players.

A friend of Jerry's showed up. I bought Jerry's lunch as a thank you and Gabe and I went up to the bar to use the Internet. We got some stuff from the gas station and soon went back to Baring.

LETITBE spent the afternoon on the riding lawn mower mowing the lawn. I got a few clock photos. Tried getting one of the train that would go by every hour but they stopped coming by.

Sewed up my pack and did a few other things. Gabe and I had dinner at the cafe, came back and got packed up to leave tomorrow. It is only 100 miles but I'm packing seven days worth of food. Gabe's shoes/etc should show up tomorrow at 7:30am. The USPS express was the fastest option, the others wouldn't be here till around 2pm.

Computer is packed up and I am pretty much ready to go tomorrow.