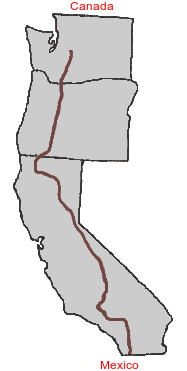 Had breakfast and didn't get onto the trail until around 9:30am. The clearcuts promptly started after the Naches Wagon (now jeep) road. The scenery was pretty blah. Just a lot of logged over forests replaced with very young trees and/or huckleberry bushes.

I was having a really hard time getting motivated. Caught back up to TP and we walked together for a bit. I told him how I really needed to take a nap. I was thinking of a lot of negative things and feeling sleepy.

All of the sudden I just started pushing it like crazy, to the point of jogging uphill. I think I had way too much sugar and it was starting to have a negative effect on me. I felt a lot better once I started pushing myself hard. Got to the top of the hill and Wendy was taking a break. Texas came up a bit later... "dude!... what... the.. fuck... happenned... with.... (pant, pant)... you?!?! I coudn't keep up!". I told him I thought I had way too much sugar and was feeling terrible, so by pushing myself it was a way of counteracting it.

The three of us walked together for the next few hours. Took a detour to where a 360 degree view was supposed to be, but all we could find was a peak that had about a 36 degree view.

TP talked a bit about a girl he used to date, then started getting animated at how he wasn't going to talk about her.

We stopped at a spring and made dinner while Wendy continued on. TP and I ended up walking into the darkness. I could hear and see I-90 at one point near Stampede Pass.

TP was ahead of me when we crossed one of the roads. I briefly saw the top of a cooler/ice chest and went to check it out. I opened it and it was full of fruit, beer, and Safeway cookies! I yelled at TP but he didn't hear me due to having his headphones in. He had missed seeing the cooler. I chased after him, screaming his name. Eventually I had to smack the back of his pack with my trekking pole to get his attention. "THERE IS A COOLER BACK THERE!" I yelled. We each had a beer and a couple cookies.

Later we passed Wendy who was in her tent by this point. The funny part was that TP's old girlfriend briefly came back into our conversation for about 10 seconds...right as we were passing Wendy. She laughed thinking TP had been talking about his old girlfriend for the last five hours.

I found a campspot on an abandoned road after we had gone about 28 miles for the day. Hopefully today will be my last night hike. I really didn't care about night hiking through this area due to the clearcuts, I just wanted to get through them.

The stars were out and TP was going to cowboy camp. I ended up setting up just the bug netting of my tent and made a little more dinner. Stomach was really hurting like it wanted more food.

TP said that we had to hurry tomorrow since he only had two cigarettes left and I laughed. It will be nice to be in town tomorrow for a day or two. By "town" I mean easy access to shelter, junk food, Internet, and power.