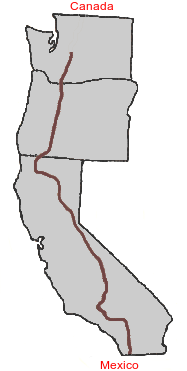 Had to shift around at night and put my feet uphill. If they are downhill they start throbbing. Uphill the pain goes away. Also heard a bunch of coyotes yapping a lot.

Woke up around 5:30am and started taking photos. I noticed I had cell access for some reason so I got caught up on a few things. Right as the sun popped up the cell service disappeared completely. It must be something with the solar radiation.

The bees were everywhere, not on me, but the buzzing was really getting to me. I put on some music to overpower the sound of their wings...problem solved.

Made breakfast and coffee up there on the rock. Probably ended up spending about four hours up there. Got onto the trail around 10:00am. Walked back down the hill to the PCT. Made my way over to the park boundary where I had a couple photos from 1985. Talked to a few day hikers along the way.

Decided to go back up to Sourdough Gap and say goodbye to Chinook Pass in the distance. As I was climbing up to the gap I saw a hiker coming down...it was Texas Poo! He didn't see me so I turned the video on my camera and sat there waiting for him to walk into the frame.

"HEYYYY! WOW!1!", he said. It was good to see him again. I told him about going up to the gap so he walked up there with me. Got up there and here was Wendy, I had not seen her since Independence way down near the bottom of the Sierras.

We talked a bit and then all walked together for the next few miles. Met a lot of day hikers, a few of which gave us a bunch of snacks.

Near Crystal Mountain I stopped to use the cell service to order another couple of memory cards from Amazon. My friend Sharon offered to bring me some to Snoqualmie Pass...but it was FAR cheaper to just order them online and overnight them.

I passed Wendy a while later, "good Internet here" she said. Caught back up with Texas Poo at Big Crow Basin. We ended up walking together for the rest of the day. It was good to be walking with him again.

He told me how at lava spring there were a couple weekender guys doing their laundry in the spring. Uh guys, this is a place people get their drinking water from...

At a trail junction I saw a sign down a side trail that read "Airplane Meadows". Ah ha! We went down there and sure enough, there were the remains of an airplane. There was less of it here now.

We also made a side trip to where Arch Rock Shelter used to be. Dad and I spent my birthday there in 1990. Texas Poo said he liked having a tour guide of the area, although my tour guide experience was running out now since this was as far north as I ever had hiked.

We passed a southbound guy, he called us "number 49 and number 50". Wendy was ahead of us, she was "number 48". He had seen a lot of northbound hikers that day (this included day hikers he said).

I made a joke about "Wednesday Teeth" (Whens-day-gonna-fall-out). Texas laughed and said he had not heard that before, he had only heard of "Summer Teeth" (some are here, some are there).

We had heard there was Trail magic going on at the cabin at Government Meadows so we were pushing to get there. I saw a very large porcupine and TP creeped up on it to try and get a better photo. It reared up and then hid under a log. We let it be and moved on.

Got to the cabin and saw a few folks there. Beads was there, I hadn't seen her since around Red's Meadow.

It turns out that one of the people doing the trail magic was Beaker, the guy who I had seen quit the trail in Seiad Valley when the wrong box showed up. I didn't recognize him since he had shaved his beard. We kind of had the same conversations again until I realized we had met before.

There were some horse packers there and I found out that the plane we had seen crashed back in 1948. The pilot was a WWII vet and was trying to get a flying/cargo service going after the war. He couldn't get insurance for the plane and ended up crashing it the next day in the meadow...he survived the wreck fortunately.

I made a late dinner and crashed out. The cabin wasn't venting right so the loft was full of wood stove smoke so we were sleeping outside tonight. On the upside, we won't have to deal with mice. Curtiss and I had to deal with them 19 years ago and they are still a problem to this day there.