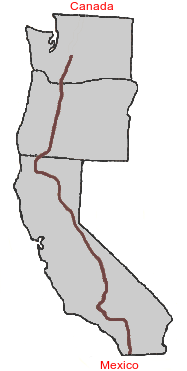 Dad and I woke up (such a nice change to be able to type that) around 7:30am. He was saying "coffee...coffee" from his tent. I made him coffee. Forgot he doesn't like poor man mocha's, just straight black coffee. This meant I ended up getting my coffee first.

The weather was a bit cloudy but nothing to worry about. We got moving around 8:00am or so. Dad and I got split up a couple times when I went off trail to retake some photos.

We got to the Twin Sister's trail junction around 11:00am. I wanted to head to Twin Sister's lakes since that was the first place I ever backpacked to 30 years ago. Dad decided to just keep hiking up the PCT since there was a long climb ahead. We decided that Crag Lake would be the rendezvous point.

This junction I have thought about for a good chunk of the trail. It was the first time I ever learned about the PCT. In 1983 when Dad and I hiked to Twin Sister's lake, we took a day trip to Fryingpan Lake. We were on the PCT for a bit and I asked dad why the PCT was numbered 2000 while the other trails all had numbers like 987 and 45. He said it was because it was 2000 miles long and went from Mexico to Canada. I couldn't comprehend such a thing. 30 years later I would be passing through that same spot while walking from Mexico to Canada.

Dad said that if I was gone too long he would kick me in the nuts. I started laughing and he laughed and said "Why do guys think that is so funny? They know how much it hurts."

I walked down the Twin Sisters trail and noticed it had been significantly rerouted. As a kid I remembered it being a bit swampy and it looked like they routed it out of the meadows. As I was going down the trail the sun started to come out. This was nice, except the downside was now it would be harder to retake some of my photos.

Oh yeah, can't remember if I mentioned this, but I had Dad bring my photo album from when I was a kid. In Packwood I went through and took iphone photos of a bunch of the photos, so now I could go retake photos from 30 years ago rather than 19.

Took a few photos of Big Twin Sister lake and then made my way to Little Twin. There were some horse packers/hunters there. They had their fire going at noon, a large American flag, and two yappy dogs. The woman kept yelling at her dog so my time at the lake reflecting on things was not exactly peaceful.

Made my way down the trail to where a photo of me and our dog Taffy was taken in 1983. It was near a waterfall that goes dry in late summer.

Walked behind the falls to where I knew an abandoned mine was. There was a mining skid there that I had never remembered seeing before.

Around three hours later I got back to the PCT. The weather was nice by now and it looked like it was going to stay that way. Finally the week of clouds had passed. The part of the trail coming up is pretty scenic so I was glad it was going to be nice for Dad and I.

Made my way to Crag lake which took a couple hours. This whole time through here made me realize how little of an area I had backpacked prior to doing the PCT. I have been out here for months and now I was passing through my "backyard" in a couple of days.

Met up with Dad at Crag Lake. I jumped off the big boulder on the north end of the lake as to try and recreate a photo Curtiss took of me in 1994. Standing up there was a little unnerving. I ended up going down to the water and making sure it was deep enough.

After launching off the rock and dropping the 12 feet to the water I was more confident about doing it again. I had to jump in a few times in order to get the photo due to the shutter delay on the camera. I also jumped in a couple more times with the GoPro camera.

We had a nice early evening climb up to the crest. Eventually we made camp on a saddle near the trail. I had scouted it out and after we had dropped our packs, I realized the PCT had switchbacked on the hill right where we were at. Oh well, the cowboy campsite was not as far off the trail as I thought.

The stars were all out so Dad wanted to try cowboy camping and not dealing with the tent. I made us some dinner and Dad was asleep not long after.

Tomorrow we will get to Chinook Pass. Need to be there by 2pm in order to meet my mom. This shouldn't be a problem since it is only about nine miles away.