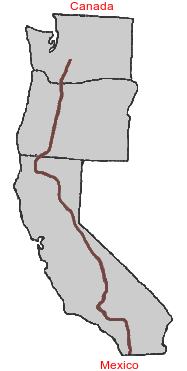 Got up and did my now-normal 7:30am departure. The trail stayed mostly flat and in the trees for the first few miles. After the turnoff to Walupt Lake it started climbing.

Found some paper maps off the trail in the bushes. This is the second time in two days I have found lost maps. These must have been from someone different because they are Halfmile's maps printed on one side of the paper. I picked them up because I could use them as clock times if I needed to.

Got to a creek/campsite and saw Chandler there packing up to leave. I asked how everyone was doing. He said that he split off from the other three (Pie, Iceman, Caddywompus) since his Achilles' tendon was really hurting in his boots, thus he was walking alright in his clogs. He was going to slow it down a bit.

Chandler and I walked together for a bit. I asked him if he had lost any maps, he laughed and said that he did. He had even backtracked to where a large log had fallen over the trail thinking he might have lost them there. We walked about a mile together and then I turned off at Sheep Lake (number 3 of 4 in Washington) to go retake a couple photos from 1994.

The photo I had from 1994 was when Curtiss and I had spent the previous day hiking in the rain. It was sunny the next day and we spread all our crap out to dry it off. For once, the spot was exactly like I remembered it and nothing was flipped around 180 degrees.

A bit after Sheep Lake #3 the trees start dropping off and the Goat Rocks start becoming the GOAT ROCKS. Nice scenic views, water running down from high above, giant cliffs, half of Portland there on the weekends, that sort of thing.

The trail continued up the backside of the Goat Rocks with a lot of great views. I refer to the south side as the "backside" simply because the north side has the stuff the mountains would want to show off...steep cliffs and glaciers.

Right before Cispus Pass I saw a guy behind me. I said hello and kept walking. He ended up catching up to me since I kept stopping to try and line up a photo from 1994 that I had taken. I looked at him and it was Purple Haze! I haven't seen him since Vermillion Valley Resort! (around 1,500 miles ago). He is the nice guy who bought the huge pie and ice cream for everyone. It was good to catch up with him.

Got to Cispus Pass and it was how I remembered it...yet flipped around 180 degrees. The sign is on the north side of the trail. Passed a fork of the Cispus Creek/River and it has changed a lot in the last 20 years. None of the boulders are in the same spot and it doesn't look like the trail has been rerouted at all there.

Saw Purple Haze again at another fork of the Cispus River, the one with a nice waterfall that lands a few feet from the trail. I was getting really hungry and realized I wouldn't make it the 3.5 miles+climbing up to where I wanted to camp. Took care of that issue and was on the trail again around 3:00pm.

Passed a couple campsites overlooking the valley, one of which was occupied. It was 3:00pm, nobody was around (maybe asleep in their tents), warm enough to be in a t-shirt, no bugs, and very few trees around. IT SURE IS A GOOD THING THEY HAD A CAMPFIRE. GOING ANYWAYS.

I wish people would get off this notion that you have to have a campfire going 24/7 just because you are "camping". This only really irks me when there is hardly any wood around to begin with. (and this is why fires are banned in California over 10,000 feet...nothing to decompose if the handful of dead things are picked up and burned)

Got up past Snowgrass Flat and saw a couple northbound hikers I had not met before. (forgot their names). Was talking to them a bit and then near a big rock cairn I saw someone say "CRAIG!" I looked up, thought for a second, then realized it was U-Turn! I hadn't seen him since I camped with him at Onion Valley before Independence. He had to flip/flop (hike northbound, then go to canada and hike southbound) due to several off-trail commitments. He was hiking southbound now. It was really good to catch up with him. He said: "man, this cairn is fucking huge". I replied, "yeah, but speaking of things that are not fucking huge....you have lost weight"

I told him to watch out for the wasps down south. His phone got destroyed in the bad hail/rainstorm a while back. This is the one that washed out part of Highway 20 in the North Cascades (and when Chief was caught in the lightning storm,...and when I was with Cora in Bend).

Came around the corner and then I could see Goat Lake. Cora, Bonzi and I went backpacking there about three years ago. It was his last backpacking trip and I felt a bit sad. I could even see right where we camped, even though it was a couple miles away.

Saw a few day hikers and people who were camped but out for a day hike. One guy said "Ah, it looks like you brought that beard up from Mexico". This was clever.

Got to where the PCT splits and there is a horse trail and a hiker trail. In the 90's the guidebook essentially said the hiker trail was no longer in use. Now it just reads "alternate" on the sign.

Went down the horse trail a bit to where a PCTA work crew was fixing the trail. Talked to them a little and went back and up the alternate/hiker trail. I have not been on the hiker trail the whole way, Curtiss and I took the horse route last time.

I went up and eventually came to the campspot where I camped with my friends Mike and Julie. I couldn't remember if anything else was above it so I dropped my pack there and went up to the ridge crest. There was nothing.

I went back down and started setting up my tent. A northbound PCT hiker came by. A guy named Redbeard whom I had not met. "Nice spot" he said. I told him this ridge is the last campspots for about 7 miles.

Got the tent set up and anchored with rocks. The sun was going down and I really wanted to accomplish my goal of going to the top of Old Snowy Mountain, drinking my beer, and watching the sunset. I needed water though so I decided to hustle back down the trail to where some snowmelt water was. As I was coming back up the colors on Mt. Adams looked really good...then I was wishing I was on top. I could have just headlamped to get water.

There was a break in the weather and the sky was clear around me. All day there were black clouds overhead and it looked like I missed a good rainstorm by a few miles.

Got to my tent and stuffed my backpack with the clock cardboard, my tripod, and some warm clothes. There was a little more rock scaling than I remembered, but I did get up to the top.

The beer was very refreshing, boy did it taste good. I took a bunch of photos and video. It looked like I had a "Casey Jones Sunset". It spent all this time building up suspense, then in the last 20 minutes the sun went behind some clouds and everything just turned a dimming grey color. Oh well, it was still a sunset of sorts.

From the top of the mountain I could see Highway 12 off in the distance. I could also see the tops of several other peaks I have climbed over the years, Rainier, Adams, Mt. St Helens, Bear Creek Mountain, Tumac Mountain, Mt. Aix, Bismark Peak, and Spiral Butte.

Got back to my tent and decided to pile rocks around it in case the wind came up. One of the trail workers told me that this evening was one of the nicest they have had in the last few days.

Oh yeah, the trail crew is camped about a mile below me on the tail. Uturn told me there was a wedding there yesterday. I asked the trail worker about it and she said there were about five people or so there for the wedding.

No cell service on Old Snowy or anywhere, so I'm gonna probably have to call Dad from White Pass. The weather is supposed to turn bad in a couple days, so I might be going to Packwood to wait it out...time will tell.