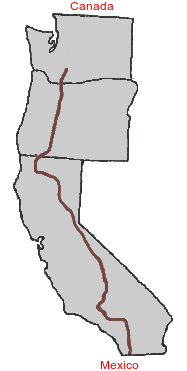 Woke up and the cloudy radiance enveloped the water in a dazzlingly lucid display of nothing. My soul was set free by the enchantment of what potential I could become this morning. The freezing outside clashed with the inner warmth of the coffee, resulting in a peace treaty of warmth, to which I was the sole benefactor.

Ok, I don't write like that. Someone wrote me thanking me for not writing like that on this blog. Although at times I feel like some of the stuff I write here is too "newsy", I also don't want it to read like something that was written at the Meaningful Life New Age bookstore "Journal Writing for the Inner Child" workshop class (7pm on Wednesdays) either.

Woke up, it was really cold and the wind was blowing. The fog was hanging over Blue Lake and I took a few photos. Made coffee with extra hot chocolate. Pleats and Sideproject were up already eating breakfast.

I got packed up and said goodbye to them. The Boy Scouts were gone already. The clouds were pretty heavy but it was a nice walk through the trees.

Saw a weekend hiker on a bridge and talked to him a bit. He asked if I had heard of "Anish Hikes" and I said I had dinner with her several hundred miles ago (~900 miles). He got really excited, OH REALLY?! Pleats and Sidetracks came along and soon we were all talking. The guy joked how he was the PCT troll on the little bridge, asking all the thru hikers questions. He asked about cleaning clothes and if we just used some soap and rinsed them in the lake or just what. I said nothing although people using soap in streams is my #3 gripe on this trail (mountain bikes and clearcutting are #1 and #2). Pleats said that they didn't use soap at all, would just take water and rinse stuff and drain the water in the bushes.

The three of us continued on and we moved along at a decent pace all morning. Somehow the topic of ordering things via bubblegum, comic books, etc came up. Today it is all just for free downloads or something. I mentioned how today's kids should have to wait 4-6 weeks for their download to complete....just to be fair to those of us who had to wait the same amount of time for our prize to show up in the mail.

Throughout the walk I kept thinking I should go into Trout Lake even though I didn't need to resupply there. I really liked the idea of huckleberry pancakes and couldn't get that out of my head. The main reason I wanted to go was to say hello to this guy named Greg who ran the general store in Trout Lake.

In early August 1994 my friend Curtiss and I got to Road 23 around night. We camped at a nearby campsite just off the PCT. Curtiss needed more food so we figured we would hitch into Trout Lake the next morning, get some food, get some breakfast, then make our way back up to the PCT and be hiking. The next morning Curtiss walked out to the road just as a truck was coming by. It stopped and he yelled "CRAIG!!!!", I came running and the guy gave us a ride into Trout Lake which was about 13 miles away.

We went to Bonnie's Restaurant and got huckleberry pancakes for breakfast. Afterwards we walked to the general store and Curtiss bought some more food provisions. The owner of the store, Greg, asked if we were on the PCT and we said that we were. He said that if we could wait a few minutes he would drive us back up to the trail. Curtiss and I were both excited with our luck at getting in and out of town so fast.

We put our packs in the back of Greg's truck and climbed in. I told Greg that I had grown up in Yakima and we started talking about Mt. St. Helens. He told us a story about how he was fishing near Mt. St. Helens when it erupted. Although he wasn't in the blast area, the ash plume was so huge that it created a huge vacuum in the sky, that his (then) long hair started rising up towards the sky a bit. I ended up telling that story all through Australia several years later when people would ask me about Mt. St. Helens.

We got back to the trailhead and he stopped the truck. Just before we got out he reached out from under his seat and pulled out two 22oz Schlitz Malt Liquor beers. "I snagged a couple beers from the store for you guys...thought you might enjoy them on the trail". I have never forgotten that moment. It was the first real time I ever experienced the joy of unexpected (and welcome) things that can occur when traveling. I have had a lot of moments like that since...but this was the first so it has always been special. It was one of those times where you suddenly feel that the world isn't such a bad place and there are good people in the world, even if you have only known them for 10 minutes. Mostly it was just realizing that all the exciting things that happened when Woody Guthrie or Jack Kerouac went hitchhiking in another era could also happen to me also.

Curtiss and I drank the beers and later I filled the beer bottle full of huckleberries that I had picked. I later gave them to my mom and she put them in the freezer. The berries were forgotten about during their edible lifetime and later stayed there for years later out of historical value. I know they were there as of around 2005 in my parents freezer so they had a good run. I still have the empty Shlitz bottle from the beer that Greg gave me.

Ok, back to present day.

We walked and eventually Pleats and Sideproject got ahead of me. I later saw them at the Steamboat Lake creek. We talked a bit and I went to get water. It was full of soap. The map showed a road and campground near the lake and I cursed the person who like, so totally needed a shower because they were like, so totally dirty and couldn't wait until they went home tomorrow.

Soap bubbles were piled up everywhere and the water had a smell to it. Although I was out of water, drinking this would be worse. I really hate the "biodegradable" soap that outdoor stores sell. People don't read the directions and think you can just soap up and jump in the lake. I even had a guy in Mojave tell me this that you can just soap up and jump in. No, if you read the directions it says not to use it directly in lakes and streams, you are supposed to bury it and whatnot. Hardly any hikers take soap into the woods. Hand Sanitizer is enough. I hope this person got nice and clean at least, even if it meant every other hiker passing by the stream couldn't use the water.

Pleats, Sideproject, and I got to Road 23 about 5:30pm. Caddywompus, Iceman, etc were all there. They were getting picked up by a friend so I stuck out my thumb. A truck went by us. We waited for about 10 minutes and the truck came back. "Are you on the PCT?", the passenger asked. We said that we were and the three of us got into the back of the truck.

Their dog (Luna?) watched us from the rear passenger area of the truck. There were some nice views of Adams on the way down the road. They dropped us off at the general store in Trout Lake.

Trout Lake has a webpage set up for PCT hikers and they do a good job of reeling them in. I didn't know if I would be able to find a place to stay since it was the busy season, but saw that you could camp in the county park behind the post office.

I went into the store and it was how I remembered it. I asked the girl working if Greg was around. "Greg Meyer?", she asked. I said, "yeah, I think so....he used to run this place, I met him here in the early 90's".

"He passed away a couple years ago, he was my father", she said.

I told her I was sorry and then told her the story I wrote above. She was really glad to hear it and later on both Pleats and Sideproject heard her telling it to other people. I bought a few things and then went outside to look at all the things in front of the store. In one of the windows was a memorial for Greg, along with a photo of folks from Trout Lake giving him a toast in front of the store.

We walked to the cafe and it is no longer "Bonnie's Cafe". It is now "The Station". They had a wood fired pizza oven out back and P & S got one of those. I got a "Vulture Burger". When I went inside to charge my phone I got talking to the owner. I showed him my photo from 1994 and told him I would send him a print of it when I got home. He took over the place in the late 90's and said that he went through the old menus from the previous incarnations of the restaurant. From each menu he picked one item and put it onto the current menu...I thought that was cool. The "Vulture Burger" was a holdover from Bonnie's Place.

We walked up to the county park afterwards. The campground hosts were really nice and said we could charge stuff on the side of their RV. Iceman and Caddywompus came in a bit later, they were camped right next to us.

I went and took a shower, 8 quarters (which I had the foresight to ask at the store about...which she had the answer for). I only bring this up because a guy came into the shower later on to see how much it would be. He told me that in Fresno there was a place that had some sort of industrial washing machine...it took 34 quarters. I really need to google that.

Tomorrow the plan is to have breakfast and then get back up to the trail. Still making plans for dad/cousin/etc meetup next week. Hoping I can camp on the west slope of Old Snowy Mountain on Tuesday night.

The whole time tonight I've been sneaking over to the camp host's RV to change out stuff I'm charging. I have to walk real quiet and put my headlamp in my hat so the beam isn't so bright. Must not wake up the dogs. There is some band playing at a tavern about a mile down the road. Seems to be classic rock covers geared towards the baby boomer crowd based on what the host said. We all wanted to go but since it is a mile away we bagged it. I feel like I should be there but alas instead I am calling it a night.