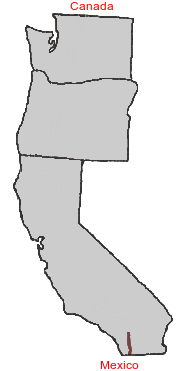 Was up and on the trail around 6:15am...was up sometime before 6:00am. Casey and Colin were actually camped just around the corner from me. I hiked a couple of miles and then ran into Chief.

We walked together to the turnoff for Live Oak Spring. In my head I had the turnoff looking completely different from how it looked in 96, oh well. I cooked breakfast ( eggs, beans, potatoes, bacon, cheese) and stashed my pack. We walked the mile to the spring. The spring was flowing well and both my 2L containers were filled up pretty fast. There was a giant oak tree just above the spring, photos can't really describe it.

I soaked my shirt in the cold water and we started the mile long climb back up the hill. When we reached the top Joe was there. He needed to rest a bit so he decided to go down to the spring and rest for the day.

Chief and I continued on. The trail kept its usual angle of "up", something it did for 15 miles yesterday and another 20 today. We rested at a trail junction for a while. Water is a little more scarce in this area and I was carrying a gallon.

At some point I discovered that my MP3 player was missing. It was in my pocket and I think the headphone cable might have been sticking out, so when I passed some brush it might have gotten pulled out. That or it is buried in a deep hidden crevice of my pack. Only out about $50 but it is annoying.

At a trail junction we saw Casey and Colin. Chief had gotten ahead of me and was waiting there too. He was going to go down the side trail and get more water. When he came back he had met the "Wild Boys". They are two guys hiking the pct and foraging all their food. Eating cactus and yucca. At the spring they had killed a rattlesnake. Chief said he saw another rattlesnake on the side trail also. The WB had given C and C some of the rattlesnake skin. I went and looked at it and noticed a 20 foot long army of ants working on the skin.

The trail climbed about another 1500 feet that was a bit brutal. I took a few pictures of Palm Springs with my tripod. The trail was cut out of the cliff, but with my headlamp I could see alright.

I made camp by the trail. I was gonna just have oatmeal and keep things easy, but I had enough water to make a huge dinner, to which I did and ate all of it.

Chief was camping in the spot I camped in 1996. A hiker came trucking by about 10:30pm named Vittles. He had 29 miles in already and had to be in Cabazon in a couple days.