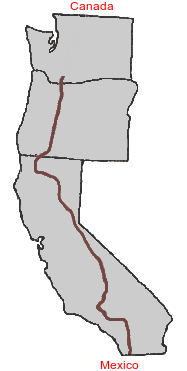 B*rad and I woke up about the same time this morning on the treehouse platform. He had the left half, I had the right (along with an extension cord and electric sander). For some reason I could not get the guy out of my head that would constantly come into the record store I worked at almost 20 years ago and ask if we had any Maynard Ferguson. What does it all mean?

I packed up, said goodbye to a few folks, and headed to the store. Got a couple burritos and some coffee. The grocery store checker asked me why the heck I would want to hike a long trail. My answers didn't seem to be sufficient for him so I made small talk and then moved on. Ran into a few hikers that had stayed at the motel in town.

Crossed the Bridge of the Gods again. Finally hiking into Washington today, or at least past the "Welcome to Washington" sign. My pack is incredibly heavy right now. There were a few things I was going to put in the bounce box but didn't..now I have an extra five pounds or so with me of stuff I am not needing. (sandals, wool sweater, gopro camera, etc). I also have a heavy seven days worth of food.

The trail eventually resumed and started climbing a bit. There was a bucket next to the trail that read "Trail Magic! Voodoo Doughnuts 8/6". I opened it up and the remains were some doughnuts that had all kind of melted and mashed together. Oh well.

Walked a few miles and took a break. Walked another couple of miles and tried taking a nap, something which I failed miserably at. Bugs started visiting me. My legs itched like crazy. Ugh. Several hikers showed up as I was getting back up.

Since I had sewn up the pack strap last night, I was trying to put the pack on by putting my left arm through first. I could not do it at all. I couldn't even visualize how to do it. So instead I put my pack on the usual way, leaning forward and resting it on my but as to not overstress the right strap until I had the left one on.

Had a super hard time staying motivated today overall. One day off from the trail is very refreshing....three days...not so much. I have heard this from other hikers too. Anything past a day is really hard to get back into the groove of things on the trail.

Hiked a bit and ran into a southbounder that Iceman and Caddywompus were talking to. He said something about going for the record and his trail name was Brix (?). I took a photo of him and wished him luck. Farther up the trail I asked Iceman who that guy was and that I didn't know there was someone else other than Scott Willimanson trying to break the record now.

"Ohhhhhhhh-hhhharrrrrgh!", I replied. A trail celebrity and I didn't even recognize him.

Got to Rock Creek where several folks were camped. It was nice to have dinner with other hikers on the trail, haven't really had a chance to do that in a long while. I dropped my pack and walked up to the bridge so I could retake a couple of 1994 photos. Even before I could see the bridge I could definitely smell it. It smelled like railroad ties.

Grand Entrance showed up (making a normal entrance) and cooked dinner next to me. We were talking and I had completely forgotten that he was one of the three guys I was in the van with when we rode from the Saufley's house to REI in Northridge. Funny story, he actually got his trail name about 100 miles after the Saufley's at Hiker Town. Hiker Town has a set up for the hikers in the garage. He didn't see the side door so he lifted up the garage door. There were a bunch of hikers on couches right next to it and dust went everywhere. Hence..."Grand Entrance"

Today was 19 miles, but it sure took forever to do. Hopefully tomorrow will be a bit more, ugh, "scootier".