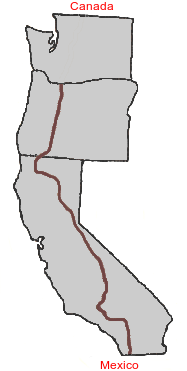 Another day off today. Spent the whole day uploading photos to the blog, updating entries, and working on some videos.

A whole crop of hikers showed up throughout the day. Iceman and Caddywompus were there. B*rad and Grand Entrance showed up.

I helped Let it Be get the PCT maps onto his iPhone. He was pretty excited about that.

I finally finished with my laptop around 4:40pm, packed it up and then hustled to the post office. Got it mailed off just in time. This was the last bounce of the laptop up the trail. The next one will be sending it home. It has had quite a journey.

Went to the Eastwind again to get a milkshake and burger. The line was long again. I had forgotten to put how my friend Jez was in line and there were these annoying teenagers in line. One of the girls said "oh gawd, people in this line must think we are being SO annoying". Jez said he wanted to tell the girl that she was correct.

Got back to Shrek's and felt like I needed to celebrate getting 14 blog entries up. A bunch of us were around the table. Siddhartha was telling us about getting stuck on Mt. Hood and having to get ahold of Search and Rescue. Once the media got ahold of his name his phone started ringing off the hood...friends calling his phone concerned about him. He had to go onto Facebook and ask people to please stop calling his phone...he needed to save the battery power to talk to the Search and Rescue. He only made one post.

Of course the media made a big deal out of how social media was being used. What did all the armchair mountain climbers conclude? Yup, "guy is screwing around on Facebook while he waits for our Search and Rescue to come get him...what a waste of our tax dollars!" Of course they didn't know that the S & R there are volunteer based...and all have been in their own accidents before which is the reason they are doing rescue now. Anyway, it was a story that had us all on edge.

A While later I came out of the house and another hiker who had shown up was sitting at the table. He looked really haggard. I had said something and then he yelled at me "WHERE ARE YOU FROM!?". I said Portland. "THEY DON'T HAVE WEED THERE, JUST HEROIN AND METH, HEROIN AND METH".

Siddhartha and I looked at each other and I said "So where are you hiking to?" The guy said he was going to Colorado. Ahh, so this guy wasn't hiking the PCT, he was hiking I-84. I asked him a couple more questions and it turns out someone at the gas station had seen his backpack and directed him up to Shrek's house. Siddhartha said the place was for hiker's only and he couldn't stay there...but he could stay at the park down by the water. I offered to walk the guy down there.

Siddhartha and I walked the guy down there. He didn't have many teeth left. He said he was 47 but looked to be about 70. We got him to the park and then walked back.

Later on we were telling the story to Let it Be and he said that at a bar in Texas he saw a sign that said "If you don't have at least six permanent teeth you are not allowed in this bar".

Spent the rest of the night sewing up the torn strap on my pack and talking to people. Tomorrow it looks like I actually will be leaving Cascade Locks to start Washington.