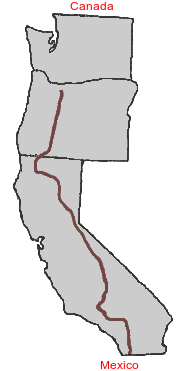 For the first time this trip I woke up on a couch, with a nearly picture perfect view in front of me. (had the tree not been blocking the view of Mt. Jefferson, it would have been picture perfect)

Sam came into the house about 6:30am and made coffee for the store. She told me there were some frosted mini-wheats if I wanted any. (yes). I got up and ate the cereal and looked out the window. A guy came back from the dock hauling the morning's catch.

I picked stuff up (beer cans, stray jiffy pop) a bit and then went over to my camp to pack up. This was also the first time of the trip I think where I camped in one spot but slept in another.

Went back to the store where Sam was helping out customers. Most of the customers showing up were there for coffee. Sam asked where Two Hats, Bo, and Siesta all were. I told them it looked like they had left already and she was a little disappointed.

Gumby and Double-it came by and said hello. I thought about staying there to drink coffee and work on this blog, but it was already 9:00am and I knew the day would be shot if I hung around any longer. I was planning on meeting Cora tomorrow around Highway 26 or 35 so I couldn't really hang around.

Finally got on the trail around 9:00am. Met a couple hikers headed southbound. One looked to be having a hard time and he asked me how much farther it was to the resort. "Not far, just right up there", I told him.

The guy got really excited and a noticeable spring popped back into his step.

The walk was easy today overall. I did get paid back for losing the map yesterday because I had to pick up three granola bar wrappers off the trail.

I was a bit preoccupied trying to find cell service through the morning. Really needed to get a hold of Cora to make resupply and Ms. Freddie dropoff plans. I really want to have her on part of this hike at least. Since I also have friends coming out from Portland on Friday/Saturday I have to get the logistics of all that sorted.

Wow, that is funny. As I was typing this a headlamp appeared. The person walked by and I said hello. He said "Thru hiker?" I said "Hey, I'm OTC". Then I heard a familiar voice say "Oh hey!", it was Beorn! Turns out he also is having friends meetup at Wahtum Lake on Friday, so we can all hang out together. He is going to try and get there Friday morning to get a spot. He also answered a few questions I had about road access and whatnot. Whew.

I looked at the map and looked for high spots where I might be able to get service. I kept going past a ridge, no service, then walked around the next ridge, no service. I left my phone out of airplane mode in case I got service. Normally I'm not that needy about cell service but in trying to set up something that other people are depending on timewise, I really needed to talk to the outside world.

Around 11:00am I crossed a dirt road and a text message from my friend Travis popped up asking where I was out. Soon after was the sound of Lily Tomlin's voice saying "awwwww, I love Craig" where were text messages from Cora. (months ago I was listening to a Nerdist podcast interview with Lily Tomlin and they brought up Craig Ferguson. That was her initial response...so I made it into a ringtone.

I spent about 30 minutes there charging my phone and sending out text messages on one bar/no data service. It was really strange because that little road crossing surrounded by hills had service. Maybe the radio waves were getting stuck in that hole or something. Regardless, I made plans with Cora and Ms. Freddie gets to go hiking with me for about three days!

Got to Lemeti Creek and had lunch with Gumby and Double-it. They left and I stayed there for a bit...to take a much needed nap. I was still not caught up on sleep from being up later the last two nights. I konked out for a long while, completely forgetting to take my shoes off. I did get my phone charged back up to 100% though.

Got walking again and around North Pinhead Butte I got better cell service. Burned up over an hour there ordering new shoes and setting up weekend plans. All of that burned up the battery in my phone and left it at 45%.

Listened to Def Leppard's first album on the walk. It is the only one I can still listen to now, mostly due to its lo-fi charm and non-Mutt Lange tinkering.. The others are a bit glossy and cheesy sounding.

Unrelated story: I remember in 1994 when Kurt Cobain killed himself, my cousin Mike and I were watching TV. Courtney Love had read the suicide note which ended with "It's better to burn out than to fade away".

"Huh? That is Def Leppard....from 'Rock of Ages'", my cousin said. We had to disagree on this one.

Got to the Warm Springs river crossing and saw a few folks camped. The log bridge is a little different than it was in 1996. Double-it retook my 1996 photo for me the best we could.

Since I pulled a whopping 19 miles today, I have about 29 to do tomorrow unless Cora meets me at highway 26...which would leave me with about 23. I'll see how it goes. I just know that she is bringing me a beer and a burrito from our favorite Mexican Food truck in Portland. Huzzzah!