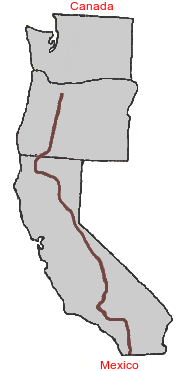 Spent the morning doing the 8000 little things I have to do when I have my laptop but am heading back out to the trail. This and packing ate up a chunk of the morning.

Cora bought us breakfast burritos at a cafe and we headed out to the trail. It looks like I wasn't going to get the blog updated like I wanted to. (cue love/hate discussion on trying to keep a detailed blog while on a trip..I had this same issue in Australia). At the cafe I tried downloading the most recent Best Show on WFMU but the wi-fi was not fast enough and I didn't want to have to wait another 15 minutes. The wifi password was "pearljam" and it made me think of my friend Justin who played on stage with them. A photo ended up in Rolling Stone but Eddie Vedder's tambourine ended up covering Justin's head. :(

It was hard to say goodbye to Cora and Freddie. Freddie even started running down the trail thinking we were all going hiking. That made me a bit sad. Said goodbye to Cora and she watched me walk away. I stopped 15 seconds later and started walking back....I had forgotten my hiking poles in the car. So Take 2 on the departure...

The forest was burnt so it wasn't the nicest way to leave the ones you love. I leapfrogged with a bunch of day hikers here and there. I had forgotten to pay a couple bills so I had to do that from the trail while I had service, so the hikers passed me again. I passed them five minutes later.

Since I walk at a faster pace, I tend to sneak up on hikers in these heavier travelled areas. I came around the corner and a guy and a lady were hiking. The guy said something to the effect of "But statistics have shown that women are more promiscuous than men". They were a bit startled when they saw me and we laughed about the conversation I had just walked in on. I was telling the guy a couple things and instead of saying "uh huh" in acknowledgement of whatever random BS story I was telling, the guy would say "copy" which I thought was kind of cute.

Later on I came around a corner and saw a girl with no pack walking out of the bushes onto the trail heading north. Her underwear was not in the required location since she spent a bit of time shuffling it around with her hands while she walked. Operation de-wedgie was in full effect.

I knew saying "HELLO!!!!" at that moment wouldn't be the best choice since she had no idea I was right behind her. I stopped for a bit, then walked for a bit banging my trekking poles on rocks to make enough noise that she would hear me. Eventually she caught up to her friend and she put her pack back on. I stopped near Three Fingered Jack and ate the rest of the pizza from the night before, along with a fair helping of cookies that Cora had made.

I am not liking these shoes I have on now. They do not breathe and are like a hippie sweatlodge on my feet (sans the smell of pot and jam band music).

Met a couple southbounders and talked to them a bit. Later I realized that they were most likely the kids my friend Zac told me to look out for on the trail. One was his nephew and can beatbox...so Zac told me I should have him come up with a beatbox rap on the spot for me. I was a little irked since that would have made for a good PCT video.

Since I was doing about 900 things this morning at the motel, Cora helped out by loading up my iPod with new music. I had noticed she put the Superconductor album on, so I jumped right to the first song and it really got me moving. It made me miss her and our departed dog Bonzi, since we made a video for the song a few years back. For a few years there I started this thing at thanksgiving where everyone would make a video and then we would all show them during dessert. One year Cora, Bonzi, and I made a video for the song "Bush Pilot":

It looked like the thunderstorm was going to miss me which was nice. I had to push it pretty hard today since I didn't get on the trail until noon, and had over 30 miles to go. A thunderstorm delay was not optional. In talking to people it sounded (and from Bend it looked like) the weather was really terrible the previous night. Some of the hikers I talked to looked a little shell shocked at how bad the thunder and lighting were.

Eventually it started to get dark. I got some good photos of Mt. Jefferson as the sun was going down. Cora said that I would hit 30 miles at 11:25pm. She was very close. Unfortunately I had to do about 33 miles. The last two miles were a bit tough. After I passed several snoring tents the trail dropped down to Russell Creek. It was a large glacial fed creek and I had to cross it in darkness. I should have just waded across the thing, but instead I climbed about 1/4 mile upstream and found some rocks to jump across.

The trail out of there was pretty steep, rocky, and full of brush. Not the sort of thing you want to be walking through at midnight after walking 30 miles already.

At another creek crossing I saw someone outside a tent and I asked if it was Kevin...they said no.

I got to the area where I was supposed to meet Kevin but couldn't see any tents nor signs. Kevin said he would be camping near Scout Lake and if I got to the Breitenbush trail junction I had gone too far. Several side trails went off in several directions and I knew it would be a rats nest trying to find Kevin on one of those. Eventually I got to the Breitenbush Trail Junction so I just made camp...figuring even if I found Kevin I would be going to bed right away since it was nearly 1am. I just would not get the end-of-day beer I was looking forward to.