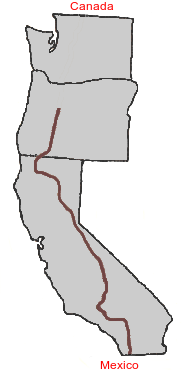 Managed to get up early and get out onto the trail. In a way I kind of like stumbling into a campsite in the darkness trying to find a campsite. You get to wake up and play the game of "let's see what the hell I camped by".

Last night there was someone in all the campsites near the PCT, so I picked a lake close to the PCT and figured I would find a spot. After a maze of trail I found a couple spots and eventually the lake, which was down a steep hill.

So this morning I woke up and now all the answers appeared. I was in a campsite and could see where the lake was. I also saw the actual trail to Cliff Lake (I ended up on some other unmarked trail). The trail to Cliff Lake ran right into a campsite where there were some horses. I am guessing if I would have ran into that last night I would have given up and continued farther on. Good thing I got slightly lost.

The trail passed a few lakes in the morning. I ended up taking a break at one of the last creek crossings for a bit. Ran into Peter Pan there. Also had a tiny bit of cell service so I sent an email to my Mom to tell Dad happy birthday (Dad does not do email).

Stopped at the Elk Lake Turnoff and debated about going in, but knew that if I did it would really mess up my plans for meeting Cora. Well, I could have had her meet me earlier up the trail, but then it would mess up plans for meeting friends near Cascade Locks. Did some more Internet there since I had service and full sunlights. Jason and some friends are going to be headed southbound from McKenzie pass, so I told him about where I might be camping. I also got an email from some friends who were going to be in Bend and they said they changed their plans due to the coming thunderstorms in the area I was in.

Made lunch by Sisters Mirror lake. Some day hikers from Canada were about and I listened to their conversation for a bit. It is unprintable here only in that I can't remember what they were talking about.

It started to get cloudier and cloudier. Yet again I was going to be walking past the Three Sisters in the middle of a rainstorm. I spent all day in 1996 hiking through a storm and froze my butt off in the tent that night...waking up to it snowing that morning.

Ran into a couple of girls who were doing trail maintenance. Their names were Cheetah and Bobcat and had hiked the PCT in 2012. They asked if I had seen their water drain on the trail back a few miles. I had not...which is the answer they were hoping for. You never think much about trail engineering until you are on a crappy trail that water does not drain off of.

The trees dropped out and the area turned into wide open spaces. I saw several tents in the area. At a trail junction I saw a bunch of toilet paper and human shit all over the ground. I bring this type of thing up everytime I have to listen to someone complain about there being too many rules in the forest (where not to camp, no fires, etc). Go to that BLM campsite at a lake which looks like the city dump if you don't want any rules in the outdoors.

The rain started about 6:00pm. I stopped a couple times for snacks but generally kept moving. The rain really started to come down about 7:00pm. I ran for a group of trees and it was much more dry under there. I looked around for somewhere to possibly put a tent but there was nothing. I figured I would just wait for the heavy part of the storm to pass, which fortunately it did. After waiting about 30 minutes the heavy downpour turned into a sprinkle and I continued on.

As a reward for dealing with the storm, I was treated to the best sunset I have ever seen on the PCT this year. It looked like a painting. The storm clouds gave it a lot of depth and I don't know, texture, that you don't see with most sunsets.

It was getting dark by the time I got to Obsidian Falls. Looks like I was going to have to miss them this time. Walked around a bit trying to find a place to camp but gave up after 20 minutes and kept walking. I could not believe the amount of people in this area, it was a tent city..and on a weekday too.

After another 30 minutes of walking I ended up finding a suitable place and pitched my tent. I decided I really didn't want to be trying to find a place to camp, in the dark, in the middle of a downpour. Lighting and thunder were going off in the distance, so that helped move me in the direction of "stop hiking and make camp now"

Since I didn't get as far as I wanted/needed to today, I am going to have to get up earlier tomorrow and get moving. My left foot and shine are really hurting. I have one Advil left so hopefully I can make it. Going to wake up tomorrow and if it looks like I'm not going to get far hopefully I can get cell service and have Cora pick me up at Highway 242/McKenzie Pass instead...that will shave about 17 miles off the hike tomorrow, but screw up plans for meeting people near Cascade Locks. Ugh.