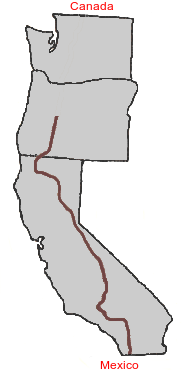 Woke last night to the sound of thunder, but I sure as heck wasn't humming any song from 1962; I went back to sleep instead.

It was thunder and lighting for a while and then the rain came. Woo hoo for staying in the shelter! Ended up waking up around 7:30am because of it.

Ate breakfast and pretended I wasn't trying to get in a lot of miles in today. I should have left Shelter Cove a lot earlier, but of course I'm saying this after having gotten rest and the blog up to date. I thought the stretch up to highway 20 would be a little slower than normal, but it is not. Well, it is slower compared to what I had been doing last week, but it is still mostly three 30 mile days I have to do.

My left shin is acting up a bit and it hurts a bit going downhill on it. Thought about bailing out at McKenzie pass and hitching into Sisters earlier on Friday, then telling Cora to pick me up there instead. Downside is that it will mess up my plans for trying to meetup with friends at a campground in 10 days or so.

This is why it is hard to plan stuff when meeting people. If the body starts acting up or you get stuck in a rainstorm for 24 hours, all the plans go out of whack.

Even after Cora drops me off on Sunday on Highway 20, I still need to do at least 10 miles that day and about 25 the rest. In Washington I'm going back to 20 miles per day so I can read books and stuff. This walk walk walk until an hour after dark is getting a bit old. I *should* only have to do it again if I don't get on the trail early tomorrow.

The day was uneventful overall. Despite the trail being easy, my sore shin made me go a bit slower, plus I got on the trail late. Was also really tired and even took a nap on a rock next to the trail for a while. I'm definitely off the high that I was on a few days ago, I think my body (and legs) are wanting more downtime.

Saw a couple guys walking southbound in jeans and looking pretty beat. They asked how far it was to Bobby Lake. I told them it was a little over four miles and they sighed loudly. One of the guys told me that they had lost their horses and would have to rent a plane to search for them if they couldn't find the horses.

I have about 57 miles to go to get to Highway 20 where Cora is picking me up in two days. A guy named Jason who wrote me via this blog is heading south from McKenzie Pass tomorrow, so we should be meeting up somewhere this side of the pass. I don't have enough time to go two miles (r/t) off trail to Elk Lake Resort to get breakfast. It is probably for the best since I need to eat up some of this food.

Rainfly is on the tent for the first time in I don't know how long. I can't see stars and it rained last night, so it is going on. Oh, and about 100 feet of the trail today smelled like a Hickory Farms store, it was the oddest thing. Ok, bedtime now since it is almost 11:30pm and my dinner is almost eaten.