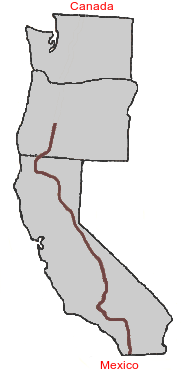 Got there and here as Spoons and Happy Feet. They were happy to see me and a bit dumbfounded how I caught back up to them. I also saw Colin, he got a hug since I hadn't seen him in about 1600 miles. Chief and I hiked with him for a bit way back in April. His trail name is Zen Mirror now.

Caddywompus and Iceman showed up a while later, along with a couple southbounders...Hot Mess and Smooth Criminal.

Caddywompus and I were trying to figure out the last place we saw each other, it was somewhere in the desert. She did bring up the first time we met in Idyllwild. "Hi, you look like PCT hikers, I have had 12 beers already" was my greeting to them on the street. ugh.

Spent the day getting caught up on email, doing laundry and taking a shower. It was nice to do nothing.

Oh, ended up talking to Chris on the phone last night, they had in fact gone home early...so I didn't have the wrong info or anything. He said the store had my resupply box.

Chris and Jen and their kids, Henry and Oliver had decorated up my resupply box. I had them bring it with them over the weekend so they could be my personal UPS service. Chris also got me some headphones and a Bloomberg Business magazine.

Met a girl named Sierra a bit later. We were talking about hiking and she mentioned how she has friends who say things like "I can't believe your husband lets you go hiking alone, there are some crazy people out there....and I'm like 'YOU GO SHOPPING AT WAL-MART AT MIDNIGHT!'"

After getting packed I spent a few hours going through photos and uploading them. Had to work on a trash can on the front porch of the store. It was the only place with both wifi and power. Ended up crashing out around midnight.