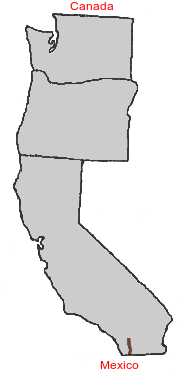 When I am near a greater source of water I am washing this ground sheet, for the second night in a row I have the smell of cow poop while I try and fall asleep.

I found a hole in the brush which led to a little flat spot in a creek bed just off the trail. I have been hearing about 3 hikers going by in the dark but they cannot see me. Apparently they are having an in depth discussion of the states where you can buy Blue Bell ice cream.

Chief and I were up a little after 6:00am and hiking by 6:20. We started talking and it turns out he had just retired and had been a firefighter for the last 31 years. Of course he had all kinds of stories. He worked near Santa Barbara and Malibu. He said that Kirk Douglas would come in and eat dinner with the firefighters once in a while. The movie Backdraft came up and I asked him how much was real and what was Hollywood. He said parts were laughable, but when the movie came out the old theater in Santa Barbara had a special screening of the movie for the local firefighters.

During the scene where the BMW is parked in front of a fire hydrant and the fireman breaks the windows of the car, then runs the hose through the windows; the whole theater erupted with applause and people were saying "I have always wanted to do that!" He said though that trying to hook up to a hydrant when a car is blocking it makes things a major pain though.

A While later we reached Joe, Nancy, and Marshall. After a few miles we saw other Joe sitting on a rock by the trail. We took a break there and I had been telling Chief about a hiker I had heard about whose trail name was 10 by 10... 10 miles by 10 AM. Chief asked me if we did that and after looking it up I saw we had gone 9.3 miles.

However, we did do 12 by 12 though. Right about the 12 mile mark was this house in the middle of nowhere owned by this guy named Mike. He had signs from the trail to his house. At his house was beer and soda, plus a screen porch people could hang out at.

Marshall had used the toilet but it was having trouble flushing. I told him he'd better fix it otherwise he'd end up with the trail name of "clogs" and everyone laughed. Eventually I went in to help him. Turns out the water pump was broken so water had to be manually poured into the back of the toilet before it would flush.

We spent several hours there. Some guys played horseshoes. I could have stayed there since I am a bit heavy on food for this section, bug krlg feeling the desire to move on. For some reason the "good enough" feeling doesn't kick in for me until after 15 miles or so. "Can't slow down" as Lionel Richie would say.

Chief left earlier than the rest of us, we left maybe an hour later.

The next few miles were uneventful. As I approached the 20 mile mark my knee started doing its usual hurting so I decided to call it good.

Tonight u have my camera tripod over me and my tent kind of draped on top of it. Last night the bugs kept getting to me so I had to pull my tent out and put the bug screen over my face. That was too hot though, so I think with the tripod elevating it a bit, that should take care of the problem.