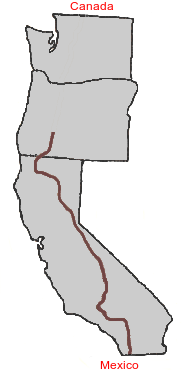 Had a whopping four hours of sleep and was up around 5:00am. After oatmeal I had a snickers bar with my coffee. It was kind of entertaining putting a bite of the bar in my mouth, then melting it with the coffee. Ah, the discoveries of something new on the trail.

Got on the trail a little before 6:00am. Passed a few tents here and there. Hooked my pants on a windfall tree and put a hole in them. About time I guess.

Hammered it pretty hard and got to the 1800 mile mark around 8:30am. Stripped out of my warm clothes into my shorts and shirt. The 1800 mile mark was in a field of boulders. This is an important detail because when I put my pack back on, my camelbak hose got caught in the pack and the nipple ripped off. Water started spewing everywhere. I dropped the pack and stopped the water leak. The nipple was nowhere to be found...it was somewhere down in one of the cracks of boulders.

I put the water into my dromedary bag. I knew this would be an issue because I drink a lot less water if it is not accessible. With the camelbak hose, it is right there. You don't even have to stop to drink water. Even worse, the dromedary bag has a taste to it.

Quick story on the dromedary bag. I got one for my 1996 hike to use for long distance water carries. The first time I ever needed it was at the Kelso Valley Road in the desert. Back then there were no water caches so I had to walk two miles off trail down the road. The "spring" was this cow pond with cows standing all around it. I had the water in the bag and a while later when I went to drink from it, my throat felt like it was on fire. This continued for the next several days until I got to Kennedy Meadows. From that point on I wouldn't need the bag anymore since water was more plentiful. I had mentioned to a PCT hiker about the throat burning. He said "dude, send it back to them...my friend had the same problem and they mailed him a bunch of free stuff". Months later when I got back to my parent's house there was a recall notice in the mail from MSR sent out to REI members.

"Dromedary bags have been recalled due to an anti-fungal agent burning the throats of users", it said. I got a replacement one which is the one I am using on this hike.

After stopping longer than I planned, I finally got going again around 9:00am. I did the thing again about thinking about getting my sunglasses out of my pack, but I was in such a zone that it took me 30 minutes to get them out of my hip belt and put them on. (a process which took about 10 seconds and didn't require me to stop walking).

It was kind of nice to be hiking this fast, such a nice break in the typical PCT routine. Was going fast enough that I ended up catching up to a couple northbounders. It was Splits and Two Step. I had met them at Kennedy Meadows.

The next part of Oregon is pretty dry, with 20-25 mile water carries. It is less of an issue here because the weather is cooler and terrain flatter than Southern California.

I stopped at one of the last water sources and made lunch. It was a bunch of rice and veggies. This unfortunately put me in a bit of a coma while I was trying to hike. Better not do this again I thought to myself. I fought the coma and kept hiking.

The trail wound through some burnt forest which was a little spooky. I was so tired from not sleeping much and eating a large lunch. Although Lou Reed was singing about a different six letter word that starts with "H" (it wasn't hiking), I couldn't get the line about "I am tired, I am weary, I could sleep for a thousand years..." out of my head.

I felt like I was getting a blister on my right foot. I laughed at one point trying to think of what hiker was trying to get the rumor started about how if you peed on your feet it would prevent blisters from happening.

Got to Highway 62 around 7:00pm, about 37 miles for the day at that point. My time calculations and math were pretty much right on. I would be able to get a restaurant dinner tonight, in addition to getting my resupply box.

A guy from California was hiking south on the PCT, just to check it out a little. He had section hiked a bunch of the trail before. His shirt was really bright pink and I wish I had gotten a photo of it. I felt like I was being a little rude by trying to get out to the road rather than keep talking. The mosquitoes were biting and I was really tired and hungry, so conversation wasn't my highest priority at that point.

No cars came so I ended up walking the whole way to the Crater Lake Lodge. A few folks wanted to talk but I was not in a sociable mood. In places like this, you really stand out if you are on the trail. My friend Brick told me that when he was a commercial airline pilot, if you wore a captain's uniform while walking through an airport you became a magnet for questions.(general flying stuff, or other things like "where is the nearest bathroom?")

Got my resupply box and a couple snacks. Unloaded the box into my pack and figured out what I didn't need. Although I knew I wouldn't need all the dinners due to me hiking faster, I coudn't make up my mind so I just dumped it all into my pack and forgot about it. I heard thunder in the distance and saw dark rain clouds. My heart sank a little because if it were to rain, it would pretty much end my high ride of hiking fast to Shelter Cove.

Went to the restaurant and had a burger for dinner. The staff there were really nice. By now it was after 9pm and the store was closed. This also meant the bathrooms were closed, along with the mailbox to mail out some postcards. I asked the woman at the campground kiosk if there was somewhere I could mail off the postcards, I had stamps on them and everything (thanks to Cora).

"Not at this hour", was her reply.

I went back to the restaurant and used the bathroom. I asked the hostess if she knew of where I could mail them and she didn't, but she asked the manager. The manager said "no, there is no place...but give them to me and I'll give them to the mail carrier tomorrow". How excellent.

Walked back up to the trail. It looks like the storm headed north since the stars were all out. Went a couple miles and decided I needed to try and get a longer amount of sleep. I wanted to make it up to the Crater Lake Rim and camp so I could catch the sunrise. I realized it was more important to just get some sleep. If I was going to do a 50 mile day it would have to be tomorrow. It was either a 50 and a 34 or two 42 mile days I would have to do. If I wanted to get to Shelter Cove by dinnertime I would have to do the 50+ mile day tomorrow. It would also be my last chance because various friends are joining me up north, and more importantly, there is no way I want to be rocketing through the best part of the PCT in my opinion. Tomorrow will be less stressful though since I'm not having to get somewhere before they close.