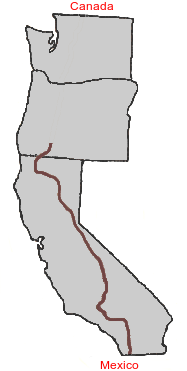 Around 7:00am this morning a woman walked by our camp. I didn't want to wake TP or SS so I just waved to her, she waved back. About a minute later she walks up near my tent to the water fountain. She was getting water for her horses. Turns out that the deer I thought I saw last night were actually horses. It was kind of funny that this morning I was reading Patti Smith's "Just Kids" book and she mentioned her first album, "Horses".

Didn't really get moving on the trail until about 8;30am. We hiked a bit, passed Two Hats who was camped off the trail. TP and SS got ahead of me. I turned on the GPS/cell phone to see how many miles I'd gone this morning....and I suddenly had five bars of 4G service. This never happens. Even so much of the wifi in towns is crippled that the cell networks are faster. I just know I had sunlight and a decent cell connection, so you gotta take it when you can get it.

I sat on a rock and spent two solid hours uploading photos to the blog. A deer even came by and ran away during the whole debacle.

Continued along and eventually needed some aural tones so I put on the WTF podcast where Marc is interviewing John Cale. Oddly enough, John Cale produced the first Patti Smith albums that I mentioned above.

Got to the Hyatt Lake road and decided I should just go to the resort, regardless of whatever hiking needed to be done later. There was little traffic so I didn't even bother trying to hitch. As I rounded the last corner I saw Soulshine walking down the road towards me.

"THE RESTAURANT IS CLOSED!!", he yelled. It turns out they changed their hours this week and are closed for a few days midweek. Texas Poo showed up a couple minutes later. We all were bummed since hot non-trail food sounded really good. They said the store was open but all they had was beer, chips, and candy bars.

A couple cars passed us and we tried hitching but figured it would be a lost cause. A souped up golf/maintenance cart came down the road and I sarcastically stuck out my thumb. The cart stopped and the guy yelled "HOP ON!"

TP got in the passenger seat. SS and I climbed onto the back with our legs dangling off the back. Boom...we were going about 20-25mph in no time. The guy turned down a gravel road and cut across the dam, it made for a wild ride. He dropped us off at the gate and we walked the remainder to the campground.

The campground and free hot showers and charging stations in the bathroom.

We told random stories at the picnic table while we finished the beer. Since TP and SS are both single, I told them when they got to Crater Lake to look sharp and be personable. At least back in the 1990's, many of the girls (and guys) that worked at Crater Lake would poach PCT hikers off the trail for a few days, since they were tired of hanging around all the guys/gals they worked with.

Gonna get up early tomorrow and get walking to make up for today's easy day.