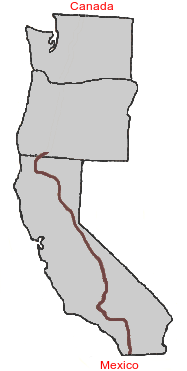 I am camped right next to a paved road that goes up to Mt. Ashland ski area. The first car since I have been here just went by, I passed the "headlight test".

Basically I just wanted to be sure that when a car went by their headlights would not hit me. Not that I'm worried about someone stopping and messing with me, but it is just better not to be seen. I had to do this all the time in Australia since I was almost always camping in the bush just off the road.

Anyways, I'm in Oregon now! Ended up going into the dark longer than I planned so I only have 7.3 miles to I-5 tomorrow.

Was on the trail around 6:30am. Had a really rough night due to the Bear Creek Salt Dish with beans. All through the night I would wake up with my throat on fire and my kidneys feeling like they were going to buckle. I would drink a tiny bit of water and it felt so incredibly refreshing. I ran out of water around 4:00am and couldn't fall back to sleep. I threatened to wake up and my body decided to go back to sleep.

After being on the trail a few miles I passed this abandoned shack that was leaning almost at a 45 degree angle. Someone had put poles to prop it up and cables (pulled up) on the back to keep it from falling further. I took a bunch of photos inside it anyways.

A cow came up the road to see what I was doing. He/she did a couple laps around the house, then over to a trash pile near an outhouse. It went through the trash, then left and went back on down the road.

Leaving California on the PCT isn't exactly lackluster. Were there purple mountain majesties, lush meadows of flowers, complete with creeks full of fish? No, leaving California you are treated to the sight of cows in the forest. All the grass is mowed down and they have shit in all the creeks. Hey, it is your public land after all, heaven forbid it gets "wasted".

I did find a gushing spring shooting straight out of the hill so I figured that one was safe. Around a corner were a whole herd of cows laying next to the trail in the shade. I went to take a photo of cow #132 but it looked a little sick and one eyeball was all fogged up. I would suggest avoiding eating cow #132 from Northern California...but how would you ever know right?

Got to the border and spent a while taking photos. It looked like some trees had blown down since 1996. The mileage for Oregon is still 40 miles greater than what it actually is.

I picked up my pack to take some photos with it and couldn't believe how much lighter it was. Without my clock cardboard, tripod, camera batteries...luxury items; my pack must have been about ten pounds lighter.

I crossed mile 1700 and later stopped at Sheep Camp Spring for a bit and made lunch. Later on it started to get more smoky in the air. Eventually I could barely see 1/4 of a mile.

Another hour or so later I felt an incredible pain on my leg, I had gotten stung by a bee. I never saw the bee but remembered what it felt like.

I had cell service sporadically so I texted my friend Travis and he did a google search for me as to how far away the fire is. Apparently there are a few, but this one is north of Ashland.

There was a campground a little off the trail over the hill. I started walking towards it, decided it was too far, then just hiked into the darkness. It was kind of hard to see due to all the smoke, so I took the fog lamp approach from cars. I took my headlamp off and held it down by my knees. Suddenly I could see the trail again.

Found a spot right before the Mt. Ashland road and made camp. Only seven miles to Callahan's Restaurant tomorrow where I have a resupply box.